Column Editor Note:  In this issue’s column, we profile how one library tackled a post-migration cleanup project.  Kristen Fredericksen, Information Processing Librarian at Catholic University, describes the process that went into cleaning up items that did not migrate with the proper process type to Alma. — SM & AM

After The Catholic University of America migrated to Alma from Voyager on July 26, 2018, there were 23,537 physical items with process type Technical – Migration.  These were items whose Voyager item status did not have an equivalent in Alma, so they were marked with a generic process status.  It seems like a high number, but it represents only 2.1% of the approximately 1,121,552 physical item records migrated from Voyager.  Despite the relatively small number of affected items, there was substantial impact on both staff and patrons. The items became unavailable to end users, even if they might have been on the shelf. Staff could not identify the true status of these items, since Technical – Migration is a catchall term that encompasses almost all Voyager statuses except Charged and Not Charged.

In the Ex Libris Voyager ILS, an item status can be either functional or informative.  There are 25 item statuses, some of which are applied automatically by the system, while others are applied manually by staff.  One item can have multiple item statuses. The following statuses used by Catholic University became Technical – Migration:

Ex Libris Alma has a different approach to item status.  Every item has a base status, which indicates whether an item is in place or not in place.  Items may also have a process type, which signifies that the item is undergoing some type of activity:

I needed a plan to remove this process type and, if necessary, assign a new status or process type.  I decided to handle the items according to their original status(es) in Voyager, so I ran an analysis in Alma Analytics to generate all items with process type Technical – Migration and the text of internal note 3.  Unfortunately, I discovered that the Voyager item status did not migrate to the note field for 2,510 items.  I reported this to Ex Libris after a test load of our data, but Ex Libris stated that this was expected behavior for items with lost statuses.  However, I realized after final migration that some items with lost statuses did have the right information in the item note field while the information did not migrate for other items without lost statuses.

In addition, the contents of the item note were not reader friendly, so they had to be parsed in Microsoft Excel.  This was the format of a typical note:

Given the lack of data for some items and the non-ideal formatting of the data that did migrate, I decided to rely on the data in our old ILS.  I still had access to Voyager reporting, so I exported the list of barcodes from Alma and ran an Access query on their original status(es) in Voyager.  There were 19 items without barcodes, so I used their Voyager item ID instead. I used the data from that query to divide the items into groups according to statuses.  I then created itemized sets in Alma for each group. These were the final categories: 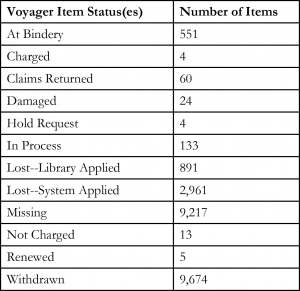 The procedure for removing the Technical – Migration process type in Alma is not intuitive, but it is simple:

As I worked my way through the categories, a few overarching strategies became clear.

° The Head of Preservation confirmed that 316 of the items with Voyager status At Bindery were in fact at the bindery, so she created work orders for them. 231 of the items had been returned from the bindery, so I removed the process type by running the Change physical items job as described above.  4 items are still being evaluated.

° The items with Voyager statuses Charged, Hold Request, and Renewed were at some stage of the circulation process at the time of migration.  Most of them were probably still checked out to patrons. Access Services staff verified that the circulation status of the items was properly reflected in Alma, so I removed the Technical – Migration process type.

° Statuses Lost–Library Applied and Missing were applied in Voyager by Catholic University staff after searching for the items multiple times, so I was certain that they were not on the shelf.  I changed their status with the Change physical items job, except I selected Missing in the dropdown menu instead of leaving it blank.

° Lost–System Applied is applied automatically by the system in Voyager, so I couldn’t be sure if these items were truly missing, especially since they all had at least one additional status:

∆ Claims Returned items had not officially been changed to Missing, so they could be on the shelf.

∆ In Transit Discharged items were most likely on the shelf but had not been received properly at their final destination.

∆ Damaged items could have been discarded because they were no longer usable, or they could still be in circulation.

∆ Not Charged items should have migrated to Alma without a problem, so they also needed to be checked.

° Access Services staff searched for 3,023 items in these categories.

∆ They located 123 items, so I removed their Technical – Migration process type.

∆ They did not locate 2,896 items, so I changed their status to Missing.

∆ I determined that 4 of the items were not real inventory, so I deleted them.

∆ I also used the Change physical items job to set some items’ physical condition to Damaged.

° The items with Voyager status In Process had been cataloged and labeled with the plan of sending them to our shared collections facility.  However, other work in the Preservation Department took precedence, and it will be a while before we can send them.  They were already suppressed from discovery, so I left them unchanged.

° The items with Voyager status Withdrawn will need more substantial work than a Change physical items job.  I need to determine whether we have withdrawn all copies of a title.  In some cases, I will be able to delete items and records, but I will retain some information about the titles in case Catholic University wants to claim access through HathiTrust in the future.  In other cases, I will only be able to suppress some holdings and item records.

The Results and Lessons Learned

Catholic University is nearing the end of the project to handle the 23,537 items that were assigned the Technical – Migration process type after migration from Voyager.  Although the process might seem daunting, it is manageable if you analyze the list in terms of functional categories.  The bulk of the work lies in checking the stacks for items that might not be missing. Even though Catholic University had completed a full inventory a few years before migration, we still had a lot of cleanup and this project was an excellent opportunity to do that work.

There are some steps that can be taken prior to migration to reduce the work of removing the Technical – Migration process type, although it is not possible to avoid the situation altogether.  Unfortunately, Voyager does not allow you to remove system-applied statuses, but you can simplify your work by reducing the number of staff-applied statuses.  For instance, change Lost–Library Applied to Missing, since that is the Alma equivalent.  Second, be sure to save a list of these items before you lose access to Voyager in case you need information that doesn’t migrate.  Finally, have a plan in place for how you want to deal with the remaining statuses so that you can fix them before they cause trouble for staff and patrons.

ATG Article of the Week: There may be silver linings, but print’s long-term future still looks distinctly cloudy

According to this post on the What's New in Publishing website parts of the print market in the United Kingdom have survived the pandemic in better shape than anyone would have dreamed. However, "for every story of screen-weary readers picking up a print subscription,...

ATG News & Announcements - 1/15/21 MSU Libraries Join Other Big Ten Libraries to Create Collection Available to All Big Ten University Faculty, Staff, and Students ARL Communications Day in Review notes that "in a historic and unprecedented maneuver for a group of...