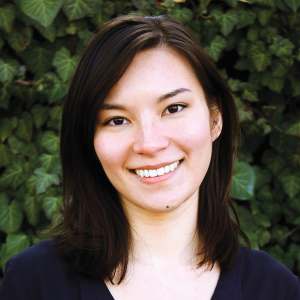 BN:  Katherine, please tell us about yourself, and how you came to your position at Ithaka S+R.

KD:  I was born in Singapore but spent most of my childhood and teenage years in Colorado, where my dad’s family is from.  My parents instilled in me a global outlook on life and I’ve always loved learning new languages, leading me to study French and Spanish in high school, so when it came time to choose a major in college, I fell into international affairs at the University of Colorado Boulder and eventually added a double major in Russian literature and culture to go along with learning Russian for my international affairs degree.  After graduation and a short stint teaching English in Slovakia, I bounced around between a few different jobs and eventually wound up working at a gift shop in Boulder, but I wanted to do a lot more with my life and had become interested in social science research, so I applied to a master’s program in political science at Central European University in Budapest, Hungary and, thankfully, was accepted at the very last minute.  Funnily enough I first met my thesis supervisor at the gift shop when he was in town for a conference, although I obviously had no idea who he was at the time.

After grad school I was fortunate enough to land an internship at the United Nations Population Fund (UNFPA) in New York City that really gave me a leg up in my career and solidified a passion for working in the humanitarian/public good space.  Throughout the internship I was searching for a full-time position and wanted to continue working on the East Coast where more non-profits are located while continuing to strengthen my research skills.  When I found ITHAKA, I was drawn to their focus on education and initially applied to a completely different role that, to be honest, I don’t think I was particularly qualified for or interested in (but I was pretty desperate for money at that point so anything would do).  Then I saw the posting for an analyst position at Ithaka S+R which fit my skill set and interests much better.  Roger Schonfeld, director of the Library, Scholarly Communications, and Museums team at Ithaka S+R, took a bit of a chance in hiring me since I was relatively inexperienced, but now I’ve been with Ithaka S+R for nearly two years.

BN:  Please tell us about your analyst role at Ithaka, and about some of the things you’ve worked on.

KD:  Just a point of clarification: there’s ITHAKA Harbors, fondly referred to as “Big ITHAKA,” and Ithaka S+R is a part of this umbrella organization.  The S+R stands for Strategy and Research. Much of the work that I’ve done here has entailed conducting research for publication on the S+R website (https://sr.ithaka.org/) or towards consulting services.  The role I was hired on to fill was envisioned as more of a generalist position in that it was supposed to span across qualitative and quantitative research and support my colleagues’ projects.  I hit the ground running when I first started, working with Danielle Cooper on her Research Support Services (RSS) program that examines scholars’ research needs by discipline, and with Liam Sweeney on his museum case studies that examine diversity and inclusion initiatives at select art museums in the U.S.  I also took on a project examining staff diversity for a library consortium, which was my first crack at a more quantitative methodology in the library space, and after that I turned my attention more or less fully to the Library Acquisition Patterns project and other library systems-related work.

BN:  How did the Library Acquisition Patterns project come about?

KD:  The Library Acquisition Patterns project was Joseph Esposito’s brainchild.  He came up with the idea around 2014 when he started wondering about the extent to which academic libraries were purchasing books from Amazon instead of through traditional wholesale vendors.  This was possibly causing university press sales to libraries to look deflated because those purchases made through Amazon were not being counted toward these presses’ sales, whose metrics were often derived from sales made through established wholesalers.  I’m not entirely sure how the project came to Ithaka, but Joe is a consultant with ITHAKA Harbors so it makes sense that he would bring the project to Ithaka S+R’s LSCM team.  Roger and Liam did the initial legwork piloting the methodology of obtaining data from an integrated library system, in this case Ex Libris’s Alma.  These initial stages of the project were done long before I joined, but I remember Roger pitching LAP to me during my interview for the analyst role because he wanted to take it to the next stage and thought that my experience doing data management and descriptive analysis at UNFPA would make me a good fit for this project.  Shortly after I joined, The Andrew W. Mellon Foundation provided a grant to fund the LAP project, making it possible to expand the number of Alma libraries supplying data while adding libraries that use OCLC’s WorldShare Management Services (WMS), building a database to house all this acquisitions data, and synthesizing findings into the final report.

BN:  And what did you learn over the course of the LAP project?

KD:  How complex this industry is; how the publishers, vendors, and libraries are so interconnected but, it appears to me, simultaneously siloed with ramifications for each group’s ability to make optimal business decisions.  It also became apparent to me throughout this project that print and electronic resources are very different in the ways they are acquired. With print, you either have it on your shelf or you don’t. But with electronic, it’s more likely that you can get it in a bundle, you can have it for a limited amount of time, multiple people can access the same item at the same time.  Like with everything else these days, there’s a need for richer data that captures these differences between print and electronic resources, especially as the acquisition models for both continue to evolve at a rapid pace.

BN:  We certainly agree on the complexity.  ProQuest’s position in the eBook market, in fact, we felt was under-represented due to the types of things you mention.  The report itself highlighted data gathering as a major challenge. Can you tell us about some of those challenges?

KD:  It was more so the data clean-up than the data gathering that was a challenge, although to your point, some of the data that would have been valuable to an analysis we weren’t able to collect.  I think anyone who works with data anticipates that it’s not going to be perfect right off the bat, so it’s a matter of getting your hands on it, unspooling all the issues, and doing a lot of research to make an executive decision on how something should be cleaned up, which can be daunting in itself.  One of the big challenges was the degree of miscategorization present in the dataset, which made the analysis much less straightforward than pulling all book items into a subset and analyzing that. Instead, we had to research which items were most likely to be books in the first place — hence the pricing parameters we introduced in an attempt to isolate monographs — and craft a dataset based on those findings.  Another example of a challenge was that publisher and vendor names were listed completely idiosyncratically and, in the former’s case, required quite a bit of engineering and manual work to standardize in the dataset, while finding every possible variant of a vendor’s name in the latter’s case was time-consuming but not particularly difficult. There were also the unanticipated challenges, like discovering that book packages are invoiced as one acquisition record instead of each book listed with its own record.

BN:  The report, on the other hand, delivered some very useful information, such as documentation of Amazon’s share of the academic library market.  What parts of the report do you think are the most significant?

KD:  Like you mention, Amazon’s share was particularly important.  It is striking how many books go through either GOBI or Amazon on their way to the academic library.  In 2017, for example, GOBI and Amazon accounted for approximately 80 percent of print book expenditures made by libraries in our sample — GOBI took about 69 percent of expenditures and Amazon followed in second place with 11 percent.  eBooks, as I’ve mentioned, were more difficult to assess because of the different ways that academic libraries acquire and access them, but of the eBooks in our sample that were obtained on a title-by-title basis, 86.4 percent of eBook expenditures still passed through GOBI, while Amazon barely registered at all as a vendor of electronic books.  Other big names like ProQuest/Coutts, JSTOR, Taylor & Francis, and Gale-Cengage continue to dominate in the eBook sector over Amazon, but it still remains that a majority of eBook expenditures for items included in our sample were funneled through GOBI.  Being able to provide evidence on university presses’ share of the market was also significant, as that figure was mostly speculation before.  In a way, one of the most significant findings is what isn’t in the report because this points to areas where data for acquisition records could be improved, as well as different ways of conceptualizing an analysis that could yield a more in-depth portrayal of what libraries are buying and how.

BN:  If you were to organize a follow-up report, what questions would you try to answer?

KD:  I’d like to look at the items classified as books in the data that are above our pricing parameters.  These items accounted for a substantial amount of libraries’ book expenditures, and some of the feedback we received suggests that these more expensive items are actually books, not misclassified items, and their cost is a result of evolving business models for books as they themselves evolve, especially regarding digital books and how they are accessed.  These items could therefore point toward future trends instead of the past trends that the report assesses. Ideally, a follow-up would also be able to bring in those book packages for analysis to examine their share of the market and if they make up for any of the print book declines we saw, but right now there’s no easy way to identify those packages.

BN:  I understand you are leaving Ithaka.  We wish you all the best, Katherine, but hope one day that we might see you again back in the world of books and libraries.  Tell us about your new position. Do you think anything you learned at Ithaka will be helpful there?

KD:  Thanks, Bob!  I’ve transitioned into a business analyst role at a company called SumZero.  They publish buyside finance research and otherwise serve as a networking platform for investors, so everything I learned about how publishers disseminate information and how individuals and organizations buy it may come in handy.  The work I did on the Library Acquisition Patterns report as far as data collection and analysis goes, as well as the qualitative research I did working with Danielle and Liam, has definitely prepared me for this new role.  It was hard to leave Ithaka but I’m quite excited to dig into SumZero’s data and be a part of their growth.