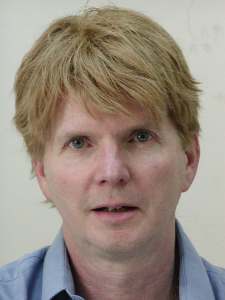 Philip Croom received his master’s degree in Library and Information Science from the University of North Carolina at Chapel Hill with a specialization in rare books, conservation and international, multilingual library activities.  His thesis, “The New French Library,” was on innovations in services and buildings and based on a research grant to study libraries in Paris, Lille, Chartres, Nice, Arles and Cannes.  Mr. Croom also completed a master’s in business administration at the Thunderbird School of Global Management that included study at Templeton College, Oxford University and License in History from the Universite de Nice, France.

As associate dean for the Rare Books and Special Collections Library and Archives at AUC, Croom directs all activities of AUC research collections including acquisition, conservation, and reformatting of all library materials — including extensive rare book and archival collections.  He is also responsible for the Center of Excellence for the Middle East and Arab Cultures. Previously, Croom served as assistant professor for Collection Management at Virginia Commonwealth University (1989-1993, 1994-1998).  He has also served as head of collections management at Eskind Biomedical Library, Vanderbilt University, where he oversaw collection development, acquisitions, cataloging, conservation and special collections departments.

MI:  Please tell us where you were born and where you grew up.

PC:  I was born (somewhat by accident) in a small town in North Carolina and spent most of my childhood in Richmond, Virginia, returning to North Carolina for college.

MI:  How did you decide to become a rare books librarian?  What was in your background that prepared you for it?

PC:  I have always had a great love of history (hard not to when you grow up next door to Thomas Jefferson’s boyhood home) and an interest in old and rare books was a natural progression.  I’ve always been fascinated by vintage engravings and the thought of how many hands a book had passed through since its production.  Another link is a real desire to preserve and conserve those materials for humanity. I’m honestly intrigued by human history, culture and the arts and their many ups and downs throughout the centuries.

MI:  What brought you to Cairo?

PC:  Coming to Cairo was a fortunate accident.  I was actually trying to get a job in Paris in order to do research for my PhD in the history of architecture.  The Chronicle of Higher Education coincidentally had a job advertisement for the Libraries at the American University in Cairo, so I applied to that as well.  Within a few days a phone interview resulted, and I came mid-year as head of Collection Management for the Main Library.  I already had had considerable experience in similar roles at Virginia Commonwealth and Vanderbilt Universities and the new position offered opportunities.  I was also keen to get to know another part of the world — see the pyramids, ride a camel, master Arabic … I am now in my 20th year at the American University in Cairo.  I was fortunate to discover shortly after my arrival the wonderful opportunities for collection building and scholarship that the University could offer.  Every day I was handling 16th, 17th, 18th century volumes so rare that other libraries would envy such treasures. I also had the good fortune to learn about an extraordinary collection of photographs — the life’s work of a local photographer — that he was eager to donate to the Libraries.  This opened up a five-year professional relationship with the extraordinary Van-Leo whose artistic photographs of famous Egyptians, including a very young Omar Sharif, opened up venues worldwide, winning the Prince Claus Foundation prize as well as an invitation to attend the ceremonies in the Royal Palace in Amsterdam.  Then there was the Hassan Fathy Collection containing virtually all the architectural work of this exceptional artist and architect that was but the first of many architectural collections that we managed to acquire resulting into our stellar Regional Architecture Collection.  So, in short, the Rare Books and Special Collections Library opened up wonderfully interesting opportunities to acquire exceptional materials, work with artists and scholars in the production of exhibits and building digital collections.

MI:  Tell us a bit about the American University in Cairo.

PC:  The AUC is an American-style liberal arts institution operating in Cairo since 1919.  Academic program enrollment is about 5,000 full time students with many part time as well.  There are Schools of Business, Global Affairs and Public Policy, Humanities and Social Sciences, Sciences and Engineering.  The University has a generous mix of Egyptian, American, Canadian and other nationalities among both faculty and students giving all undergraduate and graduate programs an excellent international mix.  After three-quarters of a century being located on Tahrir Square in central Cairo the University moved to an entirely new and state of the art campus in the desert suburb of New Cairo in 2008.

MI:  What is the origin of the AUC Rare Books collection?  What was in the collection that established it?

PC:  The core of the Rare Books and Special Collections is the Creswell Library, a collection of materials focusing on Islamic art and architecture assembled with great care and passion by Sir K.A.C. Creswell from the 1920s until his death in 1974.  The library collections continued to grow, albeit gradually, through the years and culminated in the establishment of the Rare Books and Special Collections Library in an elegant turn of the 19th century villa near the Downtown campus.  For many years this collection of donated and purchased rare books was a showplace for VIP visitors and the setting for exhibits and other memorable special events.

MI:  How has the mission of the Rare Books Library changed over the years?

PC:  For years the RBSCL collections were rather stable holdings of rare books specializing in two areas principally: Islamic art and architecture and Egyptology.  With the addition of the Hassan Fathy and Van-Leo collections things began to change as for the first time the library had the challenge of sorting, cataloguing and conserving large and unprocessed document collections of world heritage status.  When I became head of the RBSCL, I immediately recognized that from the University’s and international scholarly perspectives the most valuable collections would be these unedited document collections that offered promise of new research topics and discoveries perhaps unsuspected.  Since that time we have continued to acquire rare books but that collection is somewhat stable now at about 20,000 volumes, whereas the archival collections have grown by leaps and bounds especially in the Regional Architecture and University on the Square collections, the latter an impressive primary source documentation of the 2011 Egyptian Revolution.  Today we are busily transforming these holdings into digital format as part of our archival repository DARR (Digital Archival Research Repository) and RBSCL Digital Collections websites. We also have now major programs of recording oral and video histories. In short, we have become a research library offering primary source materials unavailable elsewhere, making the AUC an exceptional and unique research facility.

MI:  What is your favorite piece in the collection?

PC:  My favorite part of the collection is probably our rare first or Imperial Edition of the celebrated Description de l’Egypte, the 23 oversized volume study of Egypt’s people, flora, fauna, architecture, historic ruins and every other aspect of Egypt’s terrain and culture as documented by the team of scholars accompanying Napoleon during his invasion and occupation of the country 1798-1801.  The brilliantly colored engravings and massive scope of the study make the set an exceptional publication.

MI:  How has the city of Cairo changed in the years you’ve been there?  How have things changed since the revolution of 2011?

PC:  I am not sure that the city of Cairo has greatly changed during my residence with the exception of the urban expansion into the desert suburbs which have doubled or tripled the overall size of the metropolitan area.  There is even a new capital being constructed miles from the Nile and the traditional Downtown making what was desert a few years ago some of the most fashionable and busiest of neighborhoods. Downtown now is seeing several efforts to restore and gentrify some of the run-down areas.  The transfer of the AUC to New Cairo has left a void at Tahrir but the traffic is still overwhelming and never-ending.  2011 was an unforgettable year but, in terms of affecting the physical fabric of the city, I’m not sure that it did.

MI:  You’re quite an international man. Where do you consider home?

PC:  Unfortunately, people like me have some difficulty in identifying where we call home.  I honestly am “at home” in lots of places. I have ties to where I grew up but also to family in France, a love of Italy and of course so many friends in Egypt.  I see all that as an advantage and consider myself to be very fortunate to have experienced so much.

ATG Article of the Week: There may be silver linings, but print’s long-term future still looks distinctly cloudy

According to this post on the What's New in Publishing website parts of the print market in the United Kingdom have survived the pandemic in better shape than anyone would have dreamed. However, "for every story of screen-weary readers picking up a print subscription,...

ATG News & Announcements - 1/15/21 MSU Libraries Join Other Big Ten Libraries to Create Collection Available to All Big Ten University Faculty, Staff, and Students ARL Communications Day in Review notes that "in a historic and unprecedented maneuver for a group of...