Home 9 In the Spotlight 9 Creating a Culture of Use: An ATG Hot Topic

In the Spotlight, NewsChannel Originals

Creating a Culture of Use: An ATG Hot Topic 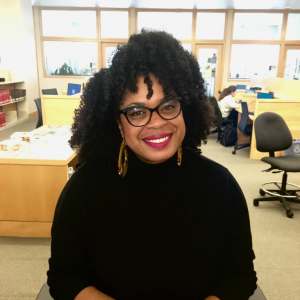 Back in September 2018 when I received the following message from one of my library users, it stirred something in me:

I have recently gotten into audiobooks and I am a current subscriber of Audible. But I am tired of paying the monthly price for these credits. I was wondering if the library has any access to audiobooks or some sort of subscription system whereby I can access the books I want at a fraction of the cost.

I knew that the library had access to a platform called “OverDrive,” but in over a year, I hadn’t heard of anyone within a community of ~2,500+ people actually using it. The collection was modest, growing slowly, and, well, overwhelmingly white in terms of representation of authors. But, my patron needed me. She requested a single, specific work be added to the collection, which was no problem. But I began asking myself,

What happens when another patron approaches the Research Desk with a similar query and needs guidance using this technology?

Who is able to find works on this platform that resonate and coincide with their interests and who is not?

I sat with these questions and let them churn inside me. And then I intentionally learned to use the OverDrive platform because my patron had a desire to engage with it. I listened to The Hunger Games trilogy first, then The Silent Wife and The Wife Between Us— not because I was particularly interested in them but rather because they were on the platform and available. Don’t get me wrong: they were all excellent, truly. But I questioned myself again:

And that’s where the purchase requests began. 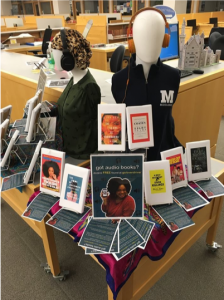 Seeing that the collection needed broader representation from a more diverse spectrum of authors, I thought about what I would like to listen to, what would serve the needs and interests of the library users I serve, what was popular, current, recognizable and even classic. As an avid reader, a person of African American cultural identity, and someone who is socially gendered as “she/her/hers,” it wasn’t hard to come up with titles that represented a variety of blacknesses, e.g., The Underground Railroad and We Need New Names, works that represented gender studies, e.g. Sister Outsider and I’m Afraid of Men, and books that were in the mainstream, e.g. The Idiot and Becoming. But as but one user of a collection, I knew that these “fixes” were not sufficient.

If we were to diversify the collection, a vast variety of people needed to be able to find something within the collection that spoke to them. The fantasy and “domestic noir” works we already held were simply not going to cut it.

So I started asking students for their input, faculty for their expertise, and colleagues for their feedback. Suggestions trickled in, which turned out to be a healthy pace as I learned more about not only the cost of each newly acquired audiobook title but also of the Green Mountain Library Consortium (GMLC), a Vermont-based collection that offered local residents who were public library card holders access to more than 5,000 titles. A new challenge presented itself en route to success which was minimizing duplication of works in the Middlebury College collection that were already available through the GMLC or to intentionally duplicate works that were in high demand and perhaps already represented within our print collection.

But even those many and occasionally furtive negotiations didn’t quite put us “out of the woods.” That is, Do audiobooks exist if you don’t know they’re there? As an academic librarian on a college campus, it is my perception that many users approach the library primarily for research or curriculum-related purposes. Many of our newest audiobook acquisitions spoke to themes raised in classes across campus but were not necessarily required readings. So, I not only felt the need to inform the community about these resources, but I also needed to develop a culture of use: it was not enough to provide access; I needed to increase the collection’s visibility and give library users a reason to engage. If hundreds of dollars, if not thousands, were to be spent on new resources, someone needed to make the effort to promote their use. And this is how the audiobooks’ promotional campaign was born. All of the following steps were taken by a breadth of library personnel to make sure the collection was a success: 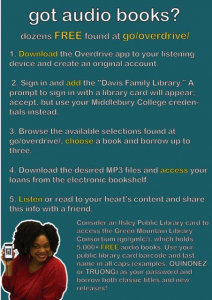 I am happy to report that as we approach the end of the academic year, several of the audiobooks within our collection remain in use. For example, I am currently entranced by Marlon James’ A Brief History of Seven Killings, the 17th audiobook I’ve enjoyed on this platform since September. New, patron-driven requests are appearing as community members identify works they’d like to access aurally. And I continue to promote the collection by sharing knowledge of these resources with incoming first-year students. I feel certain that the success of this campaign was largely informed by developing and sustaining relationships of trust and care with library users. That foundation of intimacy, provision, and responsiveness inspires users to test out and adopt new trends. For anyone interested in following similar steps at their/her/his library to build and promote a digital audiobook collection, let me encourage you to keep some of the following considerations in mind: 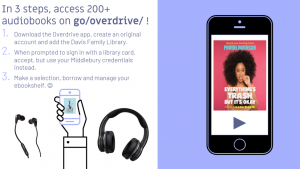 For more about Rakuten OverDrive and its history as both an audiobook and ebook provider, see Nancy Herther’s interview with founder Steve Potash in the February 2019 print issue of Against the Grain or the digital story from November 2018. Also try out OverDrive’s newest app “Libby,” which Potash and his colleagues highlighted at the Association of College and Research Libraries (ACRL) conference this month.

~ What library resource(s) do you wish your patrons would use more? How do you promote and advertise it/them?

~ What types of voices and narratives are least represented in your collections? What actions, efforts and campaigns do you intentionally take up regularly to rectify this/these underrepresentation(s)?

~ What is your library’s policy on duplicate formats of the same work (print, ebooks, audiobooks, etc.)? Do you agree with it? Do you ever feel the need to circumvent it?

Feel free to “Start the discussion” in the Comments section below.

Katrina Spencer is the Literatures and Cultures Librarian at Middlebury College in Vermont and a University of Illinois, Urbana-Champaign graduate. For more, see her personal website, www.katleespe.com or read her satire on McSweeney’s.

The Association of Global Open Science and Research (AGOSR) is seeking publisher members Library Technology Guides reports that "IGI Global, a leading medium-sized independent academic publisher of international scientific research is the founding member of The...