ATG Book of the Week: Silenced in the Library: Banned Books in America 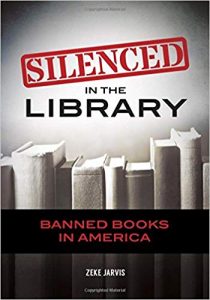 “Censorship has been an ongoing phenomenon even in “the land of the free.” This examination of banned books across U.S. history examines the motivations and effects of censorship, shows us how our view of right and wrong has evolved over the years, and helps readers to understand the tremendous importance of books and films in our society.

Books ranging from classics such as A Farewell to Arms, Lord of the Rings, The Catcher in the Rye, and The Color Purple as well as best-selling books such as Are You There, God? It’s Me Margaret, titles in the Harry Potter series, and various books by bestselling novelist Stephen King have all been on the banned books list. What was the content that got them banned, who wanted them banned, and did the ban have the desired effect of minimizing the number of people who read the title—or did it have the opposite effect, inadvertently creating an even larger readership for the book?

Silenced in the Library: Banned Books in America provides a comprehensive examination of the challenges to major books as well as the final results of these selections being deemed “unfit for public consumption.” Included in its discussion are explanations of the true nature of the objections along with the motives of the authors, publishers, and major proponents of the books. Content is organized based on why the books were banned, such as sexual content, drug use, or religious objections. This approach helps readers to see trends in how people have approached the challenge of evaluating what is “proper” and shows how our societal consensus of what is acceptable has evolved over the years. Readers will come away with a fuller appreciation of the immense power of words on a page—or an eReader device—to inflame and outrage, influence opinion, incite thought, and even change the course of history…”

“The writing is clear and straightforward, and although the author clearly dislikes censorship, he is not didactic and does explain why some people want to censor materials. . . . This volume offers a unique perspective by summarizing censorship issues topically and providing deeper coverage of significant banned titles.” – Booklist

“The general introduction provides an overview of censorship from a broad, historical point of view including the role of the government, publishers, and the effects on literature for children and young adults. . . .Each entry includes a brief description of the book followed by examples of censorship attempts and the reasons behind the challenges. The descriptions are interesting and well written. . . . There is an alphabetical list of titles and authors and a list by subject. There is an extensive bibliography and a well-developed index.” – ARBAonline

“Readers gain a fuller understanding of the historical context and trends in societal views of what has been deemed both proper and unfit for public consumption. . . . Summing Up: Recommended. All levels of students through professionals/practitioners; general readers.” – Choice