Attendance at this year’s ALA Annual in New Orleans dwindled from the impressive 23,485 attendees who ventured to Chicago.

According to Publishers Weekly, the 2018 ALA Annual in New Orleans was attended by “17,599 attendees and exhibitors” down from Chicago’s 2017 meeting. But as PW noted “Chicago conferences, where the ALA is based, always draw higher attendance and it was up from the 2016 show in Orlando” that saw 16,597 librarians and exhibitors”.

In fact, PW argued that “the attendance in New Orleans was impressive, considering that this was the third major library conference in just over four months.” As usual, those who braved the summer heat and humidity of New Orleans could select from literally thousands of programs and events at the Morial Convention Center hall and nearby locations.

Of course, no one can cover each and every one of these programs and events, so as we have done in the past, we thought we’d try and convey a sense of this year’s ALA by collecting a list of posts from a variety of sources and let you explore for yourselves.

American Libraries comprehensive overview of ALA Annual in New Orleans spotlights “six steamy but lively days” featuring “conversation and debate about some of the most important issues in the library world and beyond, including advocacy, diversity, and technology.”  Keynote speakers ranged from former First Lady Michelle Obama, who opened the conference, to historian Doris Kearns Goodwin to actress Sally Fields to US Poet Laureate Tracy K. Smith to journalist and filmmaker Jose Antonio Vargas.  (American Libraries also provides gavel-to-gavel  conference coverage at The Scoop blognot to mention videos of conference speakers on YouTube.)

Troy “Trombone Shorty” Andrews and his band of young musicians got ALA’s Annual Convention off on a high note treating the overflow crowd to his special brand of New Orleans jazz. However, the highlight of the opening session was Michelle Obama who discussed her upcoming memoir “Becoming,” with Librarian of Congress Carla Hayden before a crowd of thousands.  As NOLA.COM noted “Librarians had lined up hours before Obama’s appearance for seats near the front of the huge Morial Convention Center hall…”

These are two posts from Library Journal that will appeal to the more visually inclined. They are by Kevin Henegan & Lisa Peet with all photos ©2018 George Long. (And for those who can’t get enough checkout ALA in Pictures: Library of the Year Reception and ALA in Pictures: Movers & Shakers Gala.)

Here is Publishers Weekly take on this year’s ALA Annual. PW reporter Andrew Albanese notes that “while a star-studded slate of authors and speakers (topped by former first lady Michelle Obama) energized and inspired librarians from the show’s main stages, it was the issues addressed in the conference meeting rooms that ended up making the biggest headlines…” 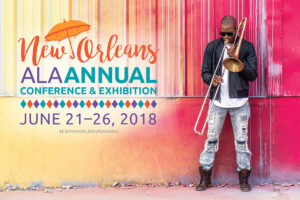 In this post American Libraries provides a solid description of the Library and Information Technology Association (LITA) “Top Technology Trends” panel moderated by independent technology consultant Marshall Breeding. Featuring the perspectives of three librarians, a vendor and a journalist, the panel “focused on upcoming technological shifts such as: quantum computing; psychometrics; embedded digital libraries; death of transparency; and next generation learning management systems…”

Here is another American Libraries post. This one is written by Marshall Breeding who thinks “the geography of the exhibit floor paralleled the ongoing trends in the library technology industry—consolidated companies bringing together growing portfolios of synergistic offerings, plus a rich array of smaller organizations providing boutique services and niche products.” According to Breeding “a theme of convergence prevails throughout the technology industry…”

LJ’s Meredith Schwartz covers ALA Council’s efforts at reorganizing the association for greater effectiveness and efficiency as well as its attempts to grow the budget and add needed staff. Ms. Swartz also highlights several important resolutions in addition to discussing the “new” business of several key ALA Council Committees.

This post from Library Journal focuses on a number of announcements heard on the exhibit floor from long time heavy hitters as well as more recent arrivals to the industry. EBSCO, ProQuest, Gale, OCLC, OverDrive, SirsiDynix, Baker & Taylor, Adam Matthew Digital, BiblioCommons; D-Tech International, and CARL.X and Library.Solution all contributed to the conversation. 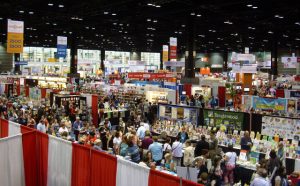 According to this post in Publishers Weekly “Carla Hayden, the Librarian of Congress, and David S. Ferriero, U.S. Archivist, talked about the challenges of public outreach, preservation, and POTUS”, and in-between, “ribbed each other over who controlled the more historically interesting collection…”

Inside ZSR is a university library blog that features the  professional travels of a number of library staff members including a number who attended ALA Annual.

This is a blog report from IGI Global recounting the company’s interactions with librarians regarding new initiatives,  programs, and products.

Here is another company blog post but this time from Readex. It discusses their annual breakfast program featuring “Prof. Stephen Aron—a leading authority on the American frontier—presented an alternative history of the Louisiana Territory in a fascinating talk titled “When Indians and Americans Got Along.” (The post also provides a link to the full presentation.)

And for those of you who are concerned about ALA governance, American Libraries provides coverage of all three Council meetings:

Open Access Archiving: JISC Announces New Sherpa Romeo Service Enhancement: Browse by Country Citing a JISC Announcement, infoDOCKET reports that "as part of Open Access week, we would like to take the opportunity to announce a Sherpa Romeo [“a summary of publishers’...