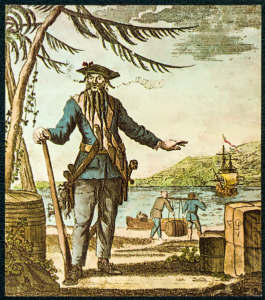 According to this post in the Smithsonian “rare 300-year-old scraps of paper have been unearthed in the sludge” of Blackbeard’s flagship and indicate that someone who sailed with the famed pirate aboard the Queen Anne’s Revenge “was likely literate and interested in sea stories.”

Through painstaking research, the scraps have been traced to the book A Voyage to the South Sea, and Round the World, Perform’d in the Years 1708, 1709, 1710 and 1711 by Captain Edward Cooke. Conservationists working on the project say the long lost scraps of paper “are offering new insight into what pirates read during their down time.” Evidently Blackbeard, or someone in his crew, liked to read “either for fun or to gather ideas for places to pillage.”

(Thanks to John Riley of Gabriel Books for providing ATG Quirkies.)