In late 1959, Eric, newly hired editor of Library Journal, was sent around by Bowker’s Fred Melcher to visit a few librarian-editor-writers across the country.  Fred (and son Dan) mistakenly thought this foreigner needed rounding in the provinces (since he’d had but England, India and a year of Newfoundland as preparation for America;  at Loughborough postwar he did his thesis on John Steinbeck).  My father, Robert D. Franklin, head of the Toledo Public Library, was a senior member of this small group, having for ten years (and then another 13 or so) put out a newsletter called The Tee Pee — after the initials Toledo Public — chockablock with librarianly tips, good-employee anecdotes and literary musings.  Eric arrived for a leisurely overnight.

I was 16 and co-captain of the high school chess team.  Eric, sly, played me and beat me.  Came outta nowhere!

Nine years later (having tasted library school at Columbia — with Ilse not-yet Moon, Pat Schuman, Art Plotnik and others! — but didn’t stay for a degree), I got out of the Army, hitchhiked all over Europe, tried out my Yale Russian in Leningrad and Moscow, lived in a cave on Crete.  Finally I returned, bearded, browned in Morocco.  Went to my sister Linda’s New York apartment, slept on the floor, she went to work, her phone rang, it was Eric, calling from Scarecrow Press, casually wondering of my whereabouts (my father had just written, My son is soon available;  try his sister’s phone).  I took the train to Metuchen for lunch.  Got hired.  Summer 1969.

Eric introduced me to all the bigwigs and some of the big shots (connotation was a shared hobby) in the library profession, including his successor John Berry (we hailed each other in impolite Morse code).  Grolier had just bought Ralph Shaw’s (and the senior Albert Daub’s) Scarecrow that summer of 1969 and Theodore Waller was nervous (Eric was not your usual corporate cog).  I pitched in editing for six months or so and then was “let go” — Eric was status-battling not just Ted Waller but Shaw as well (Shaw, one of my father’s best friends, was peeved at my library school departure), and I was a temporary casualty.  By then (January 1970) Eric and I had become true friends (we were 20 years to the week apart in age) and I’d tried to learn to drink.  He was going through a divorce.

I was rehired in late 1970 (after a summer singing in a bar in Torremolinos) and stayed through March of 1979.  Eric had firm expectations.  I aligned myself with them best I could.  Do It Now (never put it off).  Look at every page before going to the printer.  Treat the authors with great respect.  Write them back today.  Treat the employees with great respect (but a little distance too).  Don’t encourage gifts.  Don’t look back on a decision (even if maybe you made a mistake) — your certainty is a boon to the workers.  Drink gin at every lunch (I tried but sometimes skipped this ritual;  we three, including AI Daub fils, nearly always had lunch together).  Arrive at the office precisely at 8.  Leave the office precisely at 4:30 with no paper goods atop one’s desk.  Drop that middle initial.

Edit a manuscript quickly;  don’t flip back;  learn to do it right on page 10 so you don’t have to change your mind on page 60.  Keep the routine sacred;  pick up all the slack yourself.  He taught almost exclusively by example, never instruction.  Eric was a brilliant man but he did have editing weaknesses:  he made sure the phrase cinéma vérité always had a nice accent over the final e (only).  But he and Ilse devised five or six entertaining librarianly crossword puzzles for the Wilson Library Bulletin in the early-mid 1970s — and they’re hard to do!  Basically, noninterference was his standard and the authors responded well.

Eric’s wonderful retellings of “he-said, and then-I-told-him” stuff, modest accounts of himself competing with lessers, were always highly entertaining.  He turned encounters with the famous into animated stories at dinner and ducked dinners with the dull.  He especially enjoyed his meetings with literary lights;  encountering Norman Mailer, he recalled, they both went into a banty boxer crouch (Eric pursued pugilism in the British Army in India during the war).

He had two leadership lives (the American Library Association was the larger) and was a mentor in both realms.  Pat Schuman (born same week and year as I) is an excellent example of the ALA side.  I was the beneficiary of the business side — for a while — but then gradually moved into the edges of ALA-dom as well, becoming close with Arthur Curley, one of Eric’s (and my) favorite dinner companions.  This led to twelve years on the ALA Council, on of course the rear row.  Eric and I even developed a bit of a psychic connection (seriously);  as he stood in 1977 to give his ALA presidential inaugural address, his first words popped into my mind a second before he spoke them:  “It’s a long way from the back bench ….”

There are some things Eric and I used to argue about wherein I still think he was wrong.  For instance, I was pro some sort of space exploration, citing the uplift value, raising the citizenry’s gaze, giving humankind a little pride and excitement… He definitively dismissed that in favor of spending the money on society’s neediest (my word).  Nothing for space.

He was honest and loyal and generous and sympathetic.  Underneath it all.  And uncompromising.  Didn’t much like most academics (not too bright;  can’t write).  He was a superb actor (in front of any sort of group, or just me, or a table of six), the hands busy with the pipe, then the wave-away of the first smoke;  the eyes drilling you till you yielded a chuckle at a witticism.  One could sum up the man by the roster of his closest friends — not a false note in any of them and all were and are forever loyal.

I founded McFarland & Company, Inc., Publishers in 1979, a day after leaving Scarecrow, where my longtime friend Bill Eshelman and perhaps Eric’s closest friend through the ages was well ensconced to carry on.  Eric had known (as usual) it was time for me to go off on my own before I did;  he (and Esh) helped make it inevitable and pleasant.

Eric’s management manners have translated well in my 38 subsequent years of publishing.  McFarland’s 50 employees all know Eric as godfather of my company.

And so, Eric, you leave us, and the conTROversy of caPITalism remains unresolved. 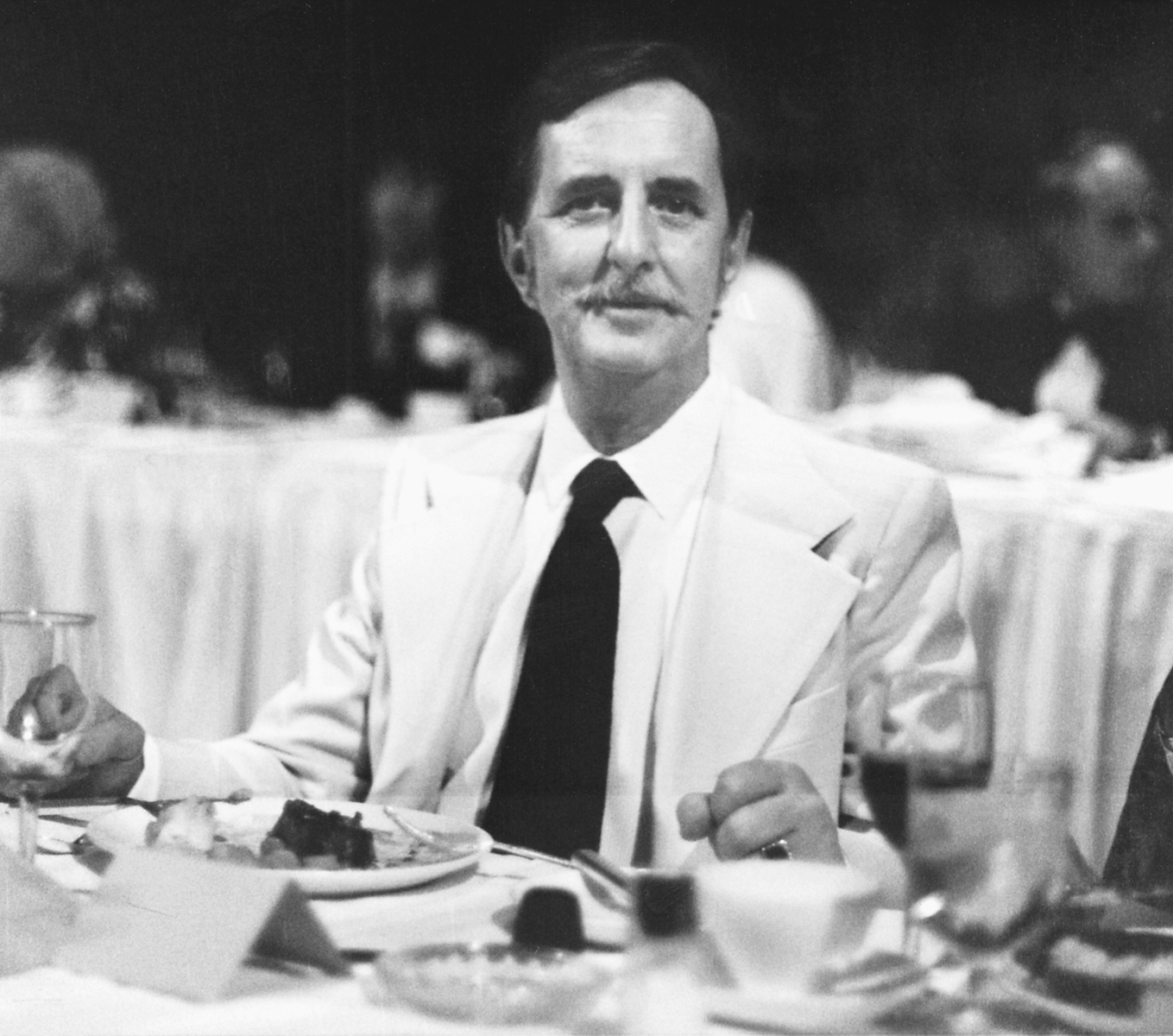 Eric Moon at the banquet celebrating his inauguration as president of the American Library Association, Detroit, 1977.