v29 #3 From the Reference Desk

v29 #3 From the Reference Desk

by Tom Gilson  (Associate Editor, Against the Grain, and Head of Reference Emeritus, College of Charleston,
Charleston, SC 29401) 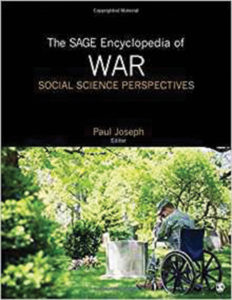 The SAGE Encyclopedia of War: Social Science Perspectives (2017, 978-1483359892, $650) is a four-volume set recently pubished by SAGE Publishing.  Edited by Tufts University professor Paul Joseph, this reference critically examines war as far more than a military exercise.  In some 650 entries, the essays here view war from the vantage point of social sciences as diverse as economics, psychology, sociology, political science, the law, and communication and mass media.

While there is discussion of specific battles, weaponry, and tactics, the bulk of this reference is devoted to the social dimensions of war including its impacts on individuals and families, racial and ethnic groups, and entire nations and cultures.  In addition, there are articles that detail underlying concepts and theories related to war as well as those discussing war’s environmental impacts; psychological ramifications, religious elements; and economic factors, not to mention tools for preventing and managing conflict like diplomacy and deterrence.

Each entry offers historical context as well as specific observations in a straightforward, fact-filled fashion.  The articles are well researched and grounded in serious scholarship and should be equally valued by the serious student and the interested lay reader.  Solid bibliographies are provided for each article leading to other helpful sources.  Although there is little to no illustration in these volumes, the text layout is visually attractive and easy to read.  Access to the articles is provided via numerous “see also” references, a comprehensive and well-designed general index, and a useful reader’s guide organized by broad categories.

The SAGE Encyclopedia of War: Social Science Perspectives adds an important non-military frame of reference to the study and understanding of war and conflict.  Like all fine subject encyclopedias, it encapsulates a great deal of research on a broad range of related topics.  Mr. Joseph and his contributors have done researchers a service in providing a scholarly, but reader friendly source of background information that students will find valuable in both starting their explorations and in answering specific questions.  In short, they have created a valuable reference work that well rounded academic library collections should gladly welcome.

An online version of the SAGE Encyclopedia of War: Social Science Perspectives is available on the SAGE Knowledge platform. 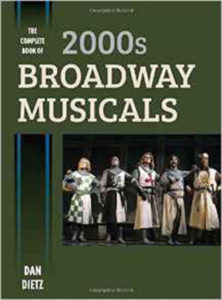 The Complete Book of 2000s Broadway Musicals (2017, 978-1442278004, $125) is the latest in author Dan Dietz’s collection of reference works on Broadway musicals.  All published by Rowman & Littlefield, Mr. Dietz’s books offer coverage of each musical performed on Broadway during every decade starting with the 1940s.  In all his prior works, he examines each musical in rich detail and this new volume is no exception.

The book starts with an introduction that enumerates the type of productions performed ranging from book musicals to magic revues and from revivals to plays with incidental songs.  This is followed by a brief analysis of the decade and how its productions match up with past decades.  A total of 213 revues and musicals are listed with the basic arrangement of the volume being chronological by annual season and opening date.

Each entry has a wealth of information including the theater where the musical was performed; the numbers of performances;  who wrote the book, lyrics and music;  the director; the cast members;  the number of acts;  and each musical number performed during each act in addition to the names of the performers.  This key data is followed by a descriptive and evaluative essay informed by quotes from various reviews as well as the expertise of the author.  If warranted, a list of any awards or nominations received is also provided.

The Complete Book of 2000s Broadway Musicals is an obvious labor of love.  The care and effort taken in assembling this level of detail is impressive, not to mention the knowledge of musical theater required to write such informed essays.  Readers from the serious scholar to the enthusiastic fan will find value and enjoyment in this reference.  This book is a natural addition for both academic and public libraries where there is interest in musical theater.  Given the topic’s level of popular appeal, many libraries may want to place an added copy in circulation.  And aside from libraries, a number of individuals will also be tempted to add it to their personal collections. 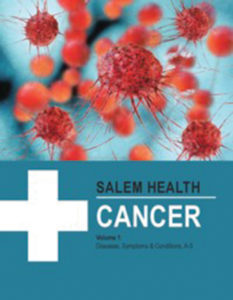 Salem Press has recently updated an important title in its Health series of reference works.  Edited by Michael A. Buratovich and Laurie Jackson-Grusby, Salem Health: Cancer, 2nd Edition (2016, 978-1619259508, $455) is a four-volume set that offers updated information about multiple aspects of a disease that impacts millions of individuals and their families every day.  In total there are some 900 articles devoted to explaining the facts about cancer in these volumes.

For ease of use and to give readers a full sense of the coverage, the set is arranged in ten categories with essays listed alphabetically within each category.  The essays range in length from 400 to 2,000 words.  Coverage starts with discussions of specific diseases, symptoms, and conditions and then moves on to medical specialties, cancer related organizations, social and personal issues, cancer biology, carcinogens and suspected carcinogens, chemotherapy and other drugs, complementary and alternative therapies, lifestyle and prevention and finally procedures.

As is the practice in Salem publications, standard formats are used for the essays to ensure uniform quality coverage and direct access to the most pertinent information.  Given the differing requirements of the categories in this reference, six different formats are used.  The contributors to the set are medical professionals and the information they provide in these essays is objective, factual and informed.  Care has also been taken so that the information provided is as straightforward and understandable as possible.  The physical layout is well designed and includes numerous charts, tables, and photos that enhance and help inform the text.  Other value added features include an appendix that lists drugs by trade name, as well as those that list and describe associations and agencies, cancer centers and hospitals, cancer support groups, and suspected carcinogens.  In addition, there is a helpful glossary, an extensive bibliography of sources referenced in the set, and a general subject index.

This new version of Salem Health: Cancer is a welcomed update of the 2009 edition.  It provides essential information in a well-organized accessible reference that will be of value to patrons ranging from high school students to lower level undergraduates doing papers to patients and their family seeking understandable, candid background information about their conditions and options.  High school, public and undergraduate libraries should all give it serious consideration.

As is the case with all Salem Press reference works, access to the online version is included with a print purchase.

Salem Press has just released a couple of new titles:

Academic Press has published a couple of substantial sets recently:

Bloomsbury Academic has a new work in the offing: