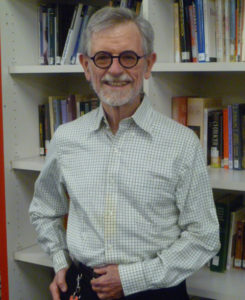 Robert P. Holley is a professor emeritus at Wayne State University in Huntington Woods, MI. Robert has been a member of ACRL since 1974 and is your ACRL member of the week for June 19, 2017.

2. What are you reading (or listening to on your mobile device)? Les Liaisons Dangereuses by Laclos to maintain my fluency in French.

4. What do you value about ACRL? The national conferences. I’ve attended all but two since they began in Boston in 1979. Beyond the practical sessions on library issues, I remember the amazing keynote speakers. My favorite choice for its audacity and support for intellectual freedom was John Waters at the 2007 Baltimore conference. This unconventional media star shocked some in the audience but exemplified for me the counter culture aspects of many librarians.

5. What have you as an academic librarian contributed to your campus? Until my retirement in 2015, I worked as a librarian and library educator in three large research universities. One of my goals was to undermine the negative stereotypes about librarians by being active in the intellectual, political, and social life of the university. Having this dual career, I also worked to bridge the divide between librarians and faculty by sharing my perspectives on how the two groups sometimes misunderstood each other.

6. In your own words: The best thing that ever happened to me was not getting a faculty appointment in 1971, the first year of the PhD glut. I became a library assistant in the Sterling Memorial Library, Yale University, and six months later started commuting to Columbia University to get my library science degree. I’ve been extremely happy as a librarian, teacher, and researcher. I have wide ranging interests and delight in synthesizing information from multiple sources, two traits librarianship values. I’m pleased that I ended my career with broad experience both as a librarian and an educator.

The Association of Research Libraries (ARL) has named Rita Vine as a visiting program officer (VPO) for its reimagining the library liaison initiative from July 2017 through June 2018. Vine is the head of faculty and student engagement at the University of Toronto Libraries in Toronto, Canada.

In her role as VPO for the reimagining the library liaison initiative, Vine will synthesize recent data and insights on how liaisons and managers perceive liaison roles, and will produce content for a shareable, open source tool kit. She will further work with ARL program staff to monitor, review, and adjust the content of ongoing liaison institutes to enhance their value to both liaisons and their supervisors…

As the head of faculty and student engagement at the University of Toronto, Vine coordinates the liaison librarian and information literacy initiatives across the library system, and liaises directly with the library’s strategic partners on campus. Vine’s portfolio has allowed her to be closely involved with both staff development and outreach in teaching and learning, research, liaison reorganization, and assessment. She is also an experienced trainer and facilitator.

Vine has been active in the ARL community, especially in the area of liaison professional development, since 2014. She has collaborated with Barbara Rockenbach (Columbia), Kornelia Tancheva (Pittsburgh), Judy Ruttenberg (ARL), and Elizabeth Waraksa (ARL) on programming for library liaisons and their supervisors at meetings of the American Library Association, and she co-authored the final report of ARL’s pilot library liaison institute, released in December 2015…

The ARL VPO program provides opportunities for outstanding staff members at ARL member libraries to contribute to special projects and programs, either in whole or in part, in order to advance the agenda of the Association. Visit the ARL website for more information about ARL’s Visiting Program Officer program.”