Despite milder than usual temperatures for an ALA Midwinter host city, this year’s conference had one of the smallest turnouts in years. The 2017 Atlanta version of ALA Midwinter saw attendance drop nearly 30% from last year’s turnout in Boston. Only 8,326 librarians, vendors, and library supporters made the trek to Atlanta for the usual business meetings, panel discussions, exhibits, award presentations, and keynote speakers.

Admittedly, attendees from the local area, who often account for numerous one-day registrations, may have had second thoughts about braving the congestion and traffic causing some of the drop off. Downtown Atlanta was jam packed on Saturday with the “March for Social Justice and Women” that drew some 60,000 protesters, while on Sunday, thousands more poured in to see the Atlanta Falcons and Green Bay Packers battle it out for the NFC Conference championship.

Nonetheless, both locals and out-of-towners who dared to make the trip were rewarded by a lineup of 1,120 meetings and events, as well as the opportunity to view the more than 450 book and technology related exhibits arrayed on the floor of the Georgia World Congress Center. So given all the action, we thought that we  would once again offer a small sense of what went on by sharing with you a few of the conference related posts and articles, that have “caught our eye.” 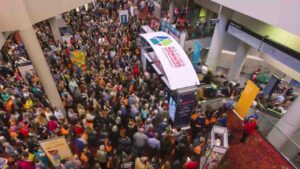