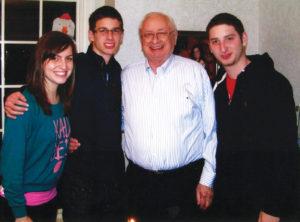 by Tom Gilson  (Associate Editor, Against the Grain)

and Katina Strauch  (Editor, Against the Grain)

ATG:  Please tell us about Midwest.  Where did the idea come from to start the company? How long have you been in business?

HNL:  Midwest Library Service has been in business for 56 years.  In the 1950s, I worked for a company in St. Louis called Matthews Medical Books, supplying books in the field of medicine to medical and nursing schools in the Midwest.  We inventoried medical and nursing books in large quantities and sold them in large quantities to these schools.  We also supplied books to about a dozen University libraries.

The books were mostly single copies and drop-shipped from the publisher to the library.  Billing and reporting on copies not yet published came from Matthews, and everything was done by hand.  It was not a very accurate or efficient way of doing business.  Ordering single copies also minimized discounts, which wasn’t cost-effective either.

Eventually, Matthews decided to discontinue supplying University libraries, since it wasn’t their core business.  After notifying the libraries, however, we received letters asking us to reconsider, because they were left with virtually no options.

The market at that time was covered basically by three companies:  Baker & Taylor, Brodart, and a company named A.C. McClurg.  Their emphasis was on supplying public libraries and school libraries, with little emphasis on University libraries.  They didn’t consider the University library market a significant factor in the industry, instead more of an afterthought.

ATG:  What was the book market like when you started Midwest?  Who were your main competitors?  Did you have a mentor who helped guide you during the early years?

HNL:  As stated previously, the three main competitors were Baker & Taylor, Brodart, and McClurg.  Since these three companies were not involved with the University library market to a large extent, Midwest was in uncharted waters.  I had no mentor, and Midwest was my own brainchild.  I saw an opportunity for a company that could deliver good service to this market.

Some University libraries ordered directly from the publisher.  This created additional paperwork within the library.  In addition, ordering single copies wasn’t efficient, and communication was difficult.  So, working from my apartment, I sent out a few letters of introduction and, to be honest, was surprised by the response.  To help manage the workload, I hired a couple of students part-time, and soon we’d outgrown our space.  The rest is history.

ATG:  Can you reminisce a bit about the important events in the bookselling business?

HNL:  During the ‘60s and ‘70s, there was an explosion of companies — I would say approximately 20 to 25 companies — going into the business of supplying University libraries.  Most of them were quite small and didn’t survive.  In fact, when W.R. Grace [a chemical company] purchased Baker & Taylor as an investment in the ‘70s, we really didn’t understand it, as this was out of the league for smaller companies.

In the ‘60s, there were really no computers, and all of the work was done by hand.  Reporting on unfilled book orders tended to be inaccurate and not reliable.  Most billing was done with typewriters and adding machines — obviously inefficient.

Midwest, however, has always been open to new trends and, with technology changing in the ‘70s, we had a two-year lead in programming systems.  We couldn’t afford an onsite in-house computer, so we worked with an outside service company to develop our computerized systems, using an IBM 360 in conjunction with punch cards.  The service processed the cards and provided us with invoices and book reporting data.

As time went on, this evolved into InterACQ, our Internet-based collection development and ordering system of today.

ATG:  What were the main challenges?  How did you grow the business?  How have you maintained a competitive edge over the years?

HNL:  In the early years, Midwest was quite small, and our major challenge was financial.  We literally started on a shoestring and, because of finances, had to limit our growth.  Our target customers were basically small to medium-size University libraries.  In the early ‘70s, we contacted a company called Commercial Credit and received financing from them based on our accounts receivable.  They financed 80 percent of our billing and accounts receivable, enabling us to expand our business.

Midwest’s focus has always been on developing and providing services that save libraries time, effort, and dollars.  Just a few examples include our Out-of-Print service, paperback binding, accurate reporting on books not yet supplied, complete shelf-ready processing, and customized billing.  And we place special emphasis on personalized service.  Each of our customers is assigned a library service representative, a standing order representative, and a sales representative, who work together to supervise, facilitate, and monitor the account.

ATG:  What are your thoughts on the Amazon phenomenon and how it has affected/is affecting Midwest?

HNL:  As a supplier of books to University libraries, Amazon certainly has been a phenomenon and seemed to come out of nowhere.  We didn’t take them very seriously until a few years ago, because libraries had invested a considerable amount of effort into developing Integrated Library Systems, starting in the 1960s.  And we know how important it is for a vendor’s system to interface fully with the library’s ILS.  Ironically, ordering from Amazon is not much different than ordering from a vendor in the 1950s.

Furthermore, they have no sales representatives and no customer service representatives.  Their billing is handled mostly by credit card, and their reporting on delayed shipments is questionable.  Everything beyond placing an order with Amazon entails more time and work for the library’s staff.  So, when selling against them, we emphasize the many services offered by Midwest, which are not available from Amazon.

ATG:  Richard Able started approval plans in the early ‘60s.  When did Midwest start participating in that trend?  We understand that you are involved in the development of university press approval plans.  Can you tell us about that?

HNL:  Having no knowledge of approval plans in the early ‘60s, I went to Kansas City to hear Richard Abel speak at the ALA.  At the time, this was a big business with big sales.  Abel’s earliest approval plans were based on a pullout from Publisher’s Weekly.  As I remember it, each book was check-marked if the book was going to be shipped on approval.  If it needed to be confirmed by the library, it was marked with a question mark.  If the book was not going to be shipped, it was marked with an “X.”

I became aware of this system from a large local University library that was one of our customers.  The assistant librarian was new to the library and had previously been involved with Richard Abel’s company on the West Coast.  I was called in to the library and informed of the situation.  After looking into the Abel plan, I told the University library that we could do the same.  Unfortunately, we were out the door.  During the ‘60s and ‘70s, Abel had all of the business, with Baker & Taylor coming much later.  During the ‘80s, we did develop a university press approval plan, which has proved to be quite successful.  Meanwhile, everything had become computerized.

ATG:  A number of book companies have gone out of business over the years, but Midwest seems to be as strong as ever.  What is your secret?  What strategies have been most effective in maintaining your place in the market?

HNL:  From 25 to 30 companies, there are now maybe seven in existence.  With all its business, the Abel company went bankrupt.  Why, I don’t know.  Blackwell came into existence in the approval business after hiring some of the Abel employees and purchasing some of the firm’s assets, including inventory lists, customer lists, and contacts.  As a result, Blackwell became a major competitor to Baker & Taylor.

All companies tout service in their advertising, but our service is based on a team approach between our sales representatives and our customer service representatives.  We make sales calls to all of our customers, and our libraries call in to an actual person when there is a problem.  This enables us to get back to the customer promptly when the problem is solved.  It’s important to note that our customer service people have 10 to 20 years of experience in the job.

ATG:  You were careful about getting into the e-book business.  Can you tell us about your current game plan for eBooks?  Where you think you are in relationship to your competitors?

HNL:  In the beginning, the eBook market was quite fragmented and not very well organized.  This made us cautious.  We did not want to get into a market area where we could not perform efficiently.  We’ve been programming for this market for the past three years, have completed testing our programs, and are now offering eBooks to our customers.  Meanwhile, the eBook market has become much more organized, and I’m confident our eBook platform can compete effectively with others in the industry.

ATG:  What do you see as the key trends in the library service industry?  How does Midwest plan to address those trends?

HNL:  Consolidation seems to be the major trend in the library booksellers’ market.  Baker & Taylor bought YBP;  then YBP was acquired by EBSCO;  Follett Corporation just announced the acquisition of Baker & Taylor in April;  and Ingram has sold its academic division, Coutts Information Services, to ProQuest.  How this will affect book acquisitions and services to libraries is a question.  We’ll have to wait and see.  If services downtrend from these two mergers, I expect Midwest to benefit, since customer service continues to be our major emphasis.

At the same time, University libraries are experiencing budget cuts.  Jobs that once required degreed librarians are being eliminated, and fewer employees are degreed.  Clerks are being hired to fill what were once professional positions, and they’re making the decisions.  In this environment, our efficient systems and the expertise of our staff can be a particular benefit to today’s University libraries.

ATG:  If we were looking into a crystal ball, what would we see in Midwest’s future?

HNL:  Since we are one of the last companies standing, I expect Midwest to continue with an optimistic future.  All programs and procedures are working efficiently, and our sales team approach — which our customers definitely appreciate — gives us a distinct edge.  Quite simply, our sole objective is to continue to develop the programs and services that meet the needs of a changing industry.