Volume 1, Issue 1 begins with a letter from editor (and M.L.S.) Monica Louzon welcoming both readers and submissions from authors:

The prospect of creating an academic journal for the Museum of Science Fiction filled me with elation and trepidation.  My months of research and planning would be for naught if I couldn’t assemble the necessary teams of editors, peer reviewers, and — most importantly — authors who would breathe life into the MOSF Journal of Science Fiction.  My vision was — and still is — not to replace the other well-established academic journals of science fiction studies that already exist, but to complement them.2

Introductions to the journal are furthered with reflections on the nature and importance of Science Fiction from Science Fiction Studies editor Veronica Hollinger and Science Fiction Research Association Pioneer Award winner Allison de Fren.  The articles in the inaugural issue are indeed widely varied and deliciously well grounded in critical theory.  It is wonderful to see references that list not only the likes of Herbert and Zelazny but also Derrida and Marx.  It’s hard to beat a table of contents that includes titles like these:

“Biogenetics, The Nation, and Globalization in Paolo Bacigalupi’s Critical Dystopias” by Derrick King

“Loving the Other in Science Fiction by Women” by Karma Waltonen

The collection is not only well rooted in Sci Fi’s past but quite contemporary, even prescient, as befits the genre.  King’s exploration of the complex trappings of globalization, Neoliberalism, climate catastrophe, and the perils of privatization in Bacigalupi could almost come from 2016 U.S. election headlines (if we actually discussed issues instead of theatrics, but I digress).3  Waltonen’s discussion of the dynamics of sex and power in the works of Octavia Butler, Marge Piercy, and others is also riveting, and is tagged with “inter-species sex” as a keyword.4  Khan’s study of the representation of Hindu gods in English-language Indian works is extremely interesting.  Plus, it contains subheadings like “Flying Saucers Battle Al Qaeda: Hindu Gods as Ancient Astronauts” and “Stoned Gods versus Brain-dead Zombies.”5  Are you reading this?  Why aren’t you reading this?

You could even be writing this, if you have the chops.  The journal invites submissions of 5,000 to 8,000 words, plus a 150-200 word abstract, via its Website: http://publish.lib.umd.edu/scifi/about/submissions#onlineSubmissions.

But get on that.  Louzon notes in her introduction to this first issue that, “we are thrilled to say we already have many more manuscripts under consideration for our next issue.”6

I can’t wait to read them. 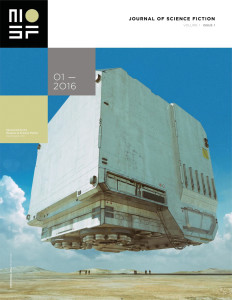