District Dispatch reports that “it was a standing room only crowd at today’s confirmation hearing of Dr. Carla Hayden, President Obama’s nominee to serve as Librarian of Congress, with the Senate Committee on Rules and Administration. The hearing marks the first step in the Senate review process.

Sarbanes (and current Enoch Pratt Free Library board member) joined Dr. Hayden and Senators Barbara Mikulski and Ben Cardin at the microphone to open the hearing. 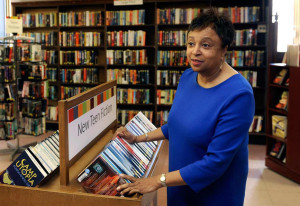 “It would be a great, great day for the nation, but a loss for Baltimore,” if Dr. Hayden were confirmed, said Senator Mikulski in her introduction to Senate colleagues. She highlighted Dr. Hayden’s ability to work with everyone from “electeds” to people in both wealthy and “hard scrabble” neighborhoods, and referenced the fact that the library stayed open in the wake of massive protests that followed Freddie Gray’s death in police custody. Senator Cardin recognized her leadership not only of the Enoch Pratt Free Library but also the Maryland State Library Resource Center, including managing technology transitions and capital improvements. “Dr. Hayden is the best qualified and will bring the respect that is needed,” Senator Cardin said.

“(Dr. Hayden) is an extraordinarily able, committed person,” said Senator Sarbanes. “The nation will be extremely well-served (by her) and I strongly urge her confirmation.”

Dr. Hayden’s testimony shared the evolution of her career, as well as changes across the profession and the Library of Congress. “As I envision the future of this venerable institution, I see it growing its stature as a leader not only in librarianship but in how people view libraries in general,” she said. “As more of its resources are readily available for everyone to view online, users will not need to be in Washington, D.C.; everyone can have a sense of ownership and pride in this national treasure…”

According to this press release, “Caitlin Cornish, former Publishing Director for Palgrave Macmillan, has joined Emerald as Head of Books Publishing.

This significant strategic appointment of an industry big-hitter forms part of Emerald’s investment in a major new programme of academic and professional books and monographs designed to bring the very latest ideas and approaches to global universities, researchers, students and practitioners.

Caitlin was integral to the merger of Palgrave Macmillan and the Nature Publishing Group that created Springer Nature; and was thereafter VP for the economics, business, statistics, finance, mathematics and law programmes with responsibility for books and journals…

Caitlin began her publishing career with Macmillan Publishers before moving to Wiley (later Wiley Blackwell), where she became Editorial Director for the Wiley Finance programme.

From Wiley, Caitlin moved to Palgrave Macmillan to head up the academic, professional and reference books teams for humanities and social sciences in the UK, US and Asia – during which her team more than doubled growth over a four-year period – before becoming Publishing Director…”

KnowledgeSpeak reports that “Jennifer Pesanelli, Deputy Executive Director for Operations and Director of Publications for the Federation of American Societies for Experimental Biology (FASEB), will be president-elect in 2016. Jennifer directs the publishing operations for The FASEB Journal and oversees the publishing programs of several other scientific societies including supporting them in efforts ranging from vendor selection and contract negotiation to editorial policy and publication business model changes. She currently serves on the SSP Board of Directors, is chair SSP’s Audit Committee, and has participated as a member of the Scholarly Kitchen’s Kitchen Cabinet. Jennifer also previously served on SSP’s Education Committee for five years.

Other board members include Lori Carlin, Senior Consultant at DeltaThink; David Crotty, Editorial Director, Journals Policy for Oxford University Press; and Alice Meadows, Director of Community Engagement & Support for ORCID. These new board members will begin their terms at the end of the 38th Annual Meeting in Vancouver, BC, in June, and join the following 2016-17 Board members.”