ATG Quirkies: The Battle of the Books that Preceded the Royals making it to the World Series.

ATG Quirkies: The Battle of the Books that Preceded the Royals making it to the World Series. 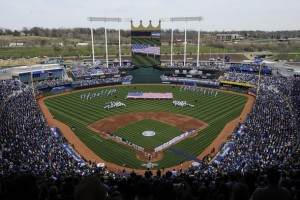 The libraries got into a scrap on Twitter over whose team will win the American League Championship Series trading barbs while using pithy book titles to get their message across.

Evidently, “the Kansas City library has plenty of experience taunting another city’s team on social media.” When the Royals faced the Giants in last year’s World Series, “the library baited the San Francisco library with sarcastic book recommendations, including: So You Think You Know Baseball? A Fan’s Guide to the Official Rules.”

One can only imagine what they are tweeting the NY Public Library now that the Royals are putting on a clinic against the Mets in this year’s Fall Classic.

(Thanks, as always, to John Riley of Gabriel Books for providing ATG Quirkies!)