ATG Book of the Week: Without Copyrights: Piracy, Publishing, and the Public Domain

ATG Book of the Week: Without Copyrights: Piracy, Publishing, and the Public Domain 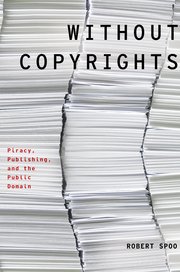 …Without Copyrights tells the story of how the clashes between authors, publishers, and literary “pirates” influenced both American copyright law and literature itself. From its inception in 1790, American copyright law offered no or less-than-perfect protection for works published abroad–to the fury of Charles Dickens, among others, who sometimes received no money from vast sales in the United States. American publishers avoided ruinous competition with each other through “courtesy of the trade,” a code of etiquette that gave informal, exclusive rights to the first house to announce plans to issue an uncopyrighted foreign work. The climate of trade courtesy, lawful piracy, and the burdensome rules of American copyright law profoundly affected transatlantic writers in the twentieth century. Drawing on previously unknown legal archives, Robert Spoo recounts efforts by James Joyce, Ezra Pound, Bennett Cerf–the founder of Random House–and others to crush piracy, reform U.S. copyright law, and define the public domain…”

“[D]oes a masterful job of exploring the intersection between European and American publishing, economics, and copyright law in the late 19th and early 20th centuries. . . . Spoo’s book is a must for anyone interested in the history of copyright law or the publishing industry. His clear writing style makes the book accessible to every audience. Summing Up: Highly recommended.” — J. D. Graveline, CHOICE

“No work better puts copyright in its place. This beautiful book is essential reading for the remaking copyright will need.” — Lawrence Lessig, author of Republic, Lost: How Money Corrupts Congress–and a Plan to Stop It

“The many pitfalls and paradoxes of copyright are the subject of Robert Spoo’s Without Copyrights, a wonderfully detailed study of how transatlantic modernism was shaped by laws surrounding the production and distribution of texts. What emerges is a revolutionary account of the ways that copyright and obscenity laws determined if, when and where modernist works could travel.” — London Times Literary Supplement

“[A] remarkable tale… Careful and definitive.” — Caleb Crain, The Nation