A People’s Palace, Ring the Changes

by Rita Ricketts  (Blackwell’s Historian and Bodleian Visiting Scholar;  Author of Adventurers All, Tales of Blackwellians, of Books, Bookmen and Reading and Writing Folk;  and Author of Scholars, Poets and Radicals, Discovering Forgotten Lives in the Blackwell Collections)  <[email protected]>

Professor H. W. Garrod, classical scholar and former professor of Poetry at Oxford, saw books as “the stronghold of Truth” — a truth, Basil Blackwell added, to be discovered anew by each generation, a sentiment reiterated by Sir David Attenborough at the opening of the Marks of Genius exhibition in Oxford’s Weston Library.  But in the past only the rich, top scholars and the clergy had this privilege — and the leisure. Increasingly from the eighteenth century, “ordinary” citizens could try to give themselves an Oxford education at church schools, workers institutes, and at the public library:  Oxford’s public library was opened in the 1850s under the librarianship of Benjamin Harris Blackwell.  His son opened a bookshop, treated like a free library, opposite the Bodleian.1  This “alternative college of the university” had no entry requirements, unlike its neighbour (the Bodleian Library), who would only admit scholars.  Now, although unbeknown a champion of Outreach for some years, the Bodleian has come out.  Its renovation of Giles Gilbert Scott’s fortress-like building, renamed the Weston Library in recognition of the generosity of the Garfield Weston Foundation, liberates treasures once hidden away.  More importantly, it is open to all.  Directly accessible from Broad Street, the entire ground floor is one vast democratic space, The Blackwell Hall, which has been generously funded by Julian Blackwell. 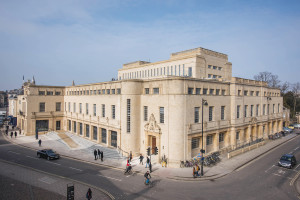 Under cover of the darkened skies occasioned by a rare eclipse of the sun, on Friday, 20 March 2015, sheets of corrugated iron were finally removed from the top of the steps of what used to be known as the New Bodleian.  Shimmering in the spring sunlight, hours later, stood the Weston Library: “a temple to the book.”2  Through the glass portals, directly accessible from Broad Street, spreads the vast Blackwell Hall.  This democratic space, enticing to any passerby and open to all, signals an end to the old divide between “Town and Gown.”3  Even better, the Weston Library’s new digital facilities will make hundreds of millions of pages of its collections available across the world, wherever there is access to the Internet.

The much-maligned and unloved New Bodleian building, which Jan Morris likened to “a municipal swimming pool,” has metamorphosed into the “Mod-Bod,” as it has been dubbed.4  But this is to sell it short.  Both inside and out, the grandeur of this Edwardian powerhouse of thought and the subtlety of its art deco embellishment have been preserved.  First commissioned in 1934, the design of Giles Gilbert Scott, the building replaced a row of huggermugger tenements dating from late Mediaeval times.  Barely finished, the new building was commandeered for war use in 1940, functioning as a Naval War Library, centre for the Prisoner of War educational book scheme by the British Red Cross, and as a site for the Inter-service Topographical Department of the Naval Intelligence Division.  Only at the end of the war could the building finally be used as a university library. 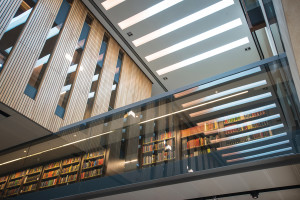 The most recent £80m reconstruction, which has so inspiringly juxtaposed old and new, is the brainchild of architect Jim Eyre.  Its conception, as a space to tempt and gratify students and scholars from all walks of life, even inveterate latte-drinkers, is in great measure due to the current Bodley Librarian, Richard Ovenden and his two immediate predecessors Sarah Thomas and Reg Carr.  Working closely with Jim Eyre, as Richard Ovenden has explained to audiences across the world, he sought to create “a 21st-century library where scholars work and members of the public explore the Bodleian’s national and international treasures.”  But how was this dream to be realized — to be paid for?

It is a tribute to both the concept and design that the essential — generous — support of a number of donors was won.  The building was renamed the Weston Library in recognition of a £25m donation to the project by the Garfield Weston Foundation, which was matched by Oxford University Press.  A £5m gift from Julian Blackwell, Life-President of Blackwell’s — whose iconic Oxford bookshop sits adjacent to the Weston Library in Broad Street — allowed the funding of Blackwell Hall.  Charles and George David made a £2m donation, and The David Reading Room has been named in honour of their father, Rhodes Scholar Charles Wendell David.  Global electronics manufacturer Samsung supported the Library with a gift of state-of-the-art hardware and bespoke software as well as expert consultancy.

The Weston Library is one part of the Bodleian’s Libraries as a whole, which support research and learning in Oxford.  But the Bodleian is also “a national and international cultural and scientific institution in its own right.”  As such, Richard Ovenden reminded, “it has major obligations for the preservation and dissemination of knowledge, which have led it to engage in major collaborative projects ranging from international exhibitions, to data analysis, digitization, and scientific investigation.”  The Weston Library’s new Centre for Digital Scholarship, fully equipped with digital technologies, embodies the Bodleian Libraries’ emphasis on digital discovery, preservation, and infrastructure to support scholarship.  “Now at last the Bodleian Libraries have a state-of-the-art facility commensurate with their world-class research collections,” said Michael Suarez, Professor of English at the University of Virginia, a current Visiting Fellow at the Weston.

Within the Weston Library, students and researchers already have their heads down in the three refurbished reading rooms.  Alongside, visiting scholars from across the globe are given shelter in a purpose-built Centre, which owes nothing to monastic asceticism.  Behind the scenes, in new world-class conservation studios that include an integrated workspace for preservation and restoration, Bodleian experts are intent on giving painstaking attention to the university’s most important collections.  Collaborating with scientists to bring new techniques — such as hyperspectral imaging — they are busy discovering new information about the Bodleian’s amazing artifacts.  Trainee digital archivists too are exploring state-of-the-art methods of preserving digital materials for the future.”

The first book to be brought back into the Weston Library, after the refurbishment, was a beautifully bound copy of Plato’s complete works in Greek, given to Elizabeth I by the Chancellor of the University of Oxford in 1564.  Curators are also at work to conserve and catalogue major 20th-century archives including, for example, those of Oxfam, Stephen Spender, Tolkien, and Alan Bennett.5  Their work is seemingly without end, as collections continue to be deposited.  Locals and visitors to Oxford are warmly invited to come in and find out more about this work in progress.  Resplendent on the wall of the Blackwell Hall they will see the newly conserved 16th-century Sheldon Tapestry Map of Worcestershire, flanked by interactive screens that provide a behind-the-scenes view of the library’s work.

But any visitor should start with a visit to Marks of Genius, the first exhibition to be mounted in the Blackwell Hall.6  They will discover exceptional treasures formerly hidden from sight:  Shakespeare’s First Folio, an original draft of Mary Shelley’s Frankenstein, the 1455 Gutenberg Bible, the dust cover of The Hobbit designed by Tolkien, and The Gloucester Magna Carta, dating from 1217;  the library holds nearly a quarter of the world’s original 13th-century manuscripts of the Magna Carta.  Presiding at the opening of the exhibition, Sir David Attenborough acclaimed the Weston Library as “a place where knowledge is preserved and shared from one generation to the next.”  And he appeared as much at home exploring here as he is in the undergrowth of the natural world.

Sharing the platform with Sir David was the celebrated physicist Stephen Hawking.  Oxford, he told the invited audience, is in his blood.  It was his birthplace, his parent’s workplace, and where he studied as an undergraduate.  He returned to pay a stunning tribute:

“The works featured in the Bodleian Libraries’ Marks of Genius exhibition truly are the product of genius, be it Einstein, Newton, or Shakespeare…I hope that thousands of people, young and old, will visit the exhibition and be inspired to develop ideas of their own, to experiment, try out new ways of thinking, and share their ideas with others…. Who knows, perhaps the Bodleian’s exhibition will stimulate the next Euclid, Newton, or Dorothy Hodgkin to put down their ideas on paper or pixels and make new Marks of Genius.”

Will the erstwhile skateboarders, who used to demonstrate their prowess on the steps of the New Bodleian before they were barred, hang up their skateboards and accept Stephen Hawking’s challenge?  Perhaps many Jude the Obscures will come into the light of the Blackwell Hall and avail themselves of an Oxford Education for free.  They have license.  Eight hundred years ago, in a meadow beside the Thames, King John put his seal on the Magna Carta — a document seen as the foundation of liberty.  Thomas Carlyle claimed a book education as a right for all men: “What we become depends on what we read…The greatest university of all is a collection of books.”  Seen thorough a 21st-century lens, the Weston Library makes a grand contribution to this “Outreach.”  It is indeed a “republic of letters” for all.  It would “greatly content” Bodleian’s founder, Sir Thomas Bodley.

Ten days later, despite volatile Spring weather and toddlers on ride-on tricycles, the Blackwell Hall has become the place to see and be seen:  smiling surprised tourists, mums with buggies, patient carers, grandparents explaining the treasures in the exhibition halls, flat-white-sipping writers and readers and busy business people rushing in to buy a mouth-watering sandwich or wicked cake, even an ex-Vice Chancellor and Sir Basil Blackwell’s ninety-one-year-old daughter were spotted.  The Tate Modern had better watch out — it has a formidable rival.  There’s no disguising the fact that Oxford’s Weston Library has become the latest people’s palace!