Author’s Note:  Rachael Elrod is the Head of the Education Library at the University of Florida, and Brent Appling is a Reference and Instruction Librarian at the University of South Carolina’s Thomas Cooper Library.  This article provides information on the benefits and challenges faced during the creation of a state-level, open-access journal including getting approval from the state agency, finding a host, forming a committee, developing policies and procedures, finding peer-reviewers, and learning to use bePress, our publishing service.

Foundations of a State-Level Library Journal:
South Carolina and Beyond

In establishing South Carolina Libraries, the intention was to continue the mission of communication and professional development, but was expanded to also serve as an opportunity to publish peer-reviewed articles that pertain to the librarian profession.  To ensure the development of a useful publication, literature on state-level library publications was reviewed.  During this literature review, several functions and benefits of state-level library publications were identified.

According to Scherlen (2008), some of the most prominent functions of state-level library journals include providing information for state library association members about association news, elections, and minutes from executive board meetings, documenting state library conferences, professional networking, section reporting, historical documentation, sharing best local practices, publishing first time authors, as well as other beneficial functions.  Throughout the literature, first time publishing and practitioner publishing emerged as two of the more recognizable values of state-level library publications.  Scherlen describes first time publishing as a shared value for several state-level library journal editors, and is used widely as a solicitation tactic.

Several different authors have identified practitioner written articles as being the heavier valued form of research and communication of best practices among LIS professionals (Clapton 2010, Schlögl and Stock 2008, Haddow 2010).  Practitioner written articles, as opposed to traditional peer-reviewed articles, consist largely of the communication of practical implementations of proven practices, recommendations for other LIS professionals, and often include a reduced use of technical terminology and are not overly concerned with the development of theory (Haddow, 2010).  These types of articles make up a large percentage of the contents of association journals.

According to studies by Schlögl and Stock (2008) and Haddow (2010), LIS professionals in Germany and Australia clearly placed more importance on practitioner oriented articles and publications than on peer-reviewed research articles in their field.  Haddow also points out that “publications of library associations reach a wider practitioner audience than any of the scholarly titles in the LIS field.”  Thus, association journals, which within the LIS field often are highly concerned with communication and straight-forward best practice research over peer-reviewed theoretical research, are among the more highly read publications for the intention of professional development within the LIS field.

Furthermore, an analysis of a twenty-year run of the Journal of the American Society for Information Science by Harter and Hooten (1992) showed a decrease in the communication of practitioner research and an increase of more traditional scholarly publications by authors from academic units at universities.  This study concluded that as information science developed as an academic discipline, much of the communicated research was moving away from “practice-oriented roots” and toward the development of theoretical foundations.  In the more recent studies though (the aforementioned papers by Schlögl and Stock, and Haddow), it appears that the trend has started to reverse, with LIS professionals preferring the communication of practical research findings to those of the more theoretical persuasion.  Reviewing this literature points to the contention that association journals play a large role in buoying the efforts of practitioner communication, both on the part of authors and readers within the LIS profession.

A survey on state-level library journal usage was sent to the state library organizations of all 50 states for distribution with responses from 30 states.  The majority of respondents were from academic libraries (43.8%) with over 20 years’ experience.  When asked what article types were most likely to be read in their state’s journal, the top response was peer-reviewed articles at 85%, followed by columns at 81.7%, non peer-reviewed articles at 79.6%, and lastly state/regional book reviews at 71%.

Thus, a high impetus has been placed on publishing practitioner research articles that can be adapted to multiple LIS environments, rather than just research conducted by authors in an academic setting who are motivated by things such as tenure and promotion.  This is an important aspect for South Carolina Libraries, because SCLA is an association for all types of librarians and library professionals in South Carolina.  Therefore, the publication should foster the authorship of all different librarians and library professionals, which is why the publication accepts peer-review as well as non peer-review article submissions.

The first step in the process was to officially present the idea of creating the journal to the SCLA’s Executive Board.  The proposal was made in August of 2013 and immediately approved.  South Carolina Libraries was added as a subgroup under the Editorial Committee.

The next step involved finding a place to host our journal.  We knew, with the cost of printing and the small size of the organization, that printing was not an option.  We needed something online, easy to use, and most importantly, free.  The possibility was considered that if we could not find something free, we may be able to advertise to afford the publication, but that would add another layer of complexity we did not want to deal with if we didn’t have to.

Fortunately, a perfect opportunity presented itself in the form of Scholar Commons, the institutional repository of the University of South Carolina.  This platform had already been established as a repository for work completed by University of South Carolina affiliates, and was already hosting several academic journals.  The manager of Scholar Commons, Chris Hare, was approached with the proposal for South Carolina Libraries and was enthusiastic about helping to establish the journal.

With approval from SCLA and a place to host the journal, we then needed to find people to help with the legwork of launching the journal.  An email message was sent to the SCLA listserv asking for people to serve in various capacities: Copy Editors, Peer-Reviewers, Book Review Editor, Column Writers, and people to help in general with the creation of the journal’s policies and procedures.

Once we had our Editorial Board created we set about with the creation of the policies and procedures.  We used the various policies and procedures of other state library journals to guide us.  Three state-level journals that were a big help to us were the Georgia Library Quarterly, Tennessee Libraries, and Kentucky Libraries.  In addition, a regional publication, the Southeastern Librarian, served as a great mentor on our journey and provided us with examples of many of their policies to edit for ourselves.  Each of these journals had Editors that were enthusiastic about providing any tidbit of knowledge they could to help us out.

SCLA’s current membership is 344.  With a small number of members, the Editorial Board decided it best to open the possibility of publishing to “anyone with a vested interest in libraries in South Carolina.”  This would allow all types of Librarians — academic, public, K-12, special, etc. — to have a voice in the journal.  This would also allow other people with an interest in libraries such as library staff, library students, and even vendors and patrons to publish as long as their manuscript revolved around libraries in the state of South Carolina.

Naming the journal South Carolina Libraries came after a lengthy discussion with the Editorial Board.  It was decided that naming it the South Carolina Librarian would alienate those in the library field that are not librarians.  A name such as Palmetto Libraries would be overkill since many, many things in South Carolina are called Palmetto this or Palmetto that.  Since a majority of other states named their journal “State Name Libraries,” as seen in Appendix A, we decided to go with that format to have some consistency with other journals and to be inclusive to all working in the library field in the state.

Pros and Cons of Open-Access

In addition, we were able to collaborate with the South Carolina State Library to digitize the past issues mentioned previously to add to the history of libraries in South Carolina.  By choosing an open-access option, this historic knowledge will be available to all.  This was very exciting, especially since these journals were housed only in a few locations, many only available in microfiche format.

The platform utilized by Scholar Commons is provided through a subscription to bePress, an online publisher that helps establish institutional repositories throughout the U.S.  bePress also supplies excellent support in the form of a journal support professional who helped immensely in learning how to utilize the bePress editorial management software.  Uploading articles turned out to be very much a trial-and-error process, and the support from bePress was tremendous and active all the way up to the launch of the first issue.

The opportunity to publish was posted in several modes of communication including SCLA listservs, the SCLA Webpage, Facebook, and word of mouth.  There was also a direct solicitation effort for articles from specific library professionals which eventually turned into the library “spotlight” articles that were published in the first issue.  These methods were successful as we eventually received several articles in all different categories.

The following is a list of State Library Association journals found online including the state, the name of the publication, and the URL for the journal. 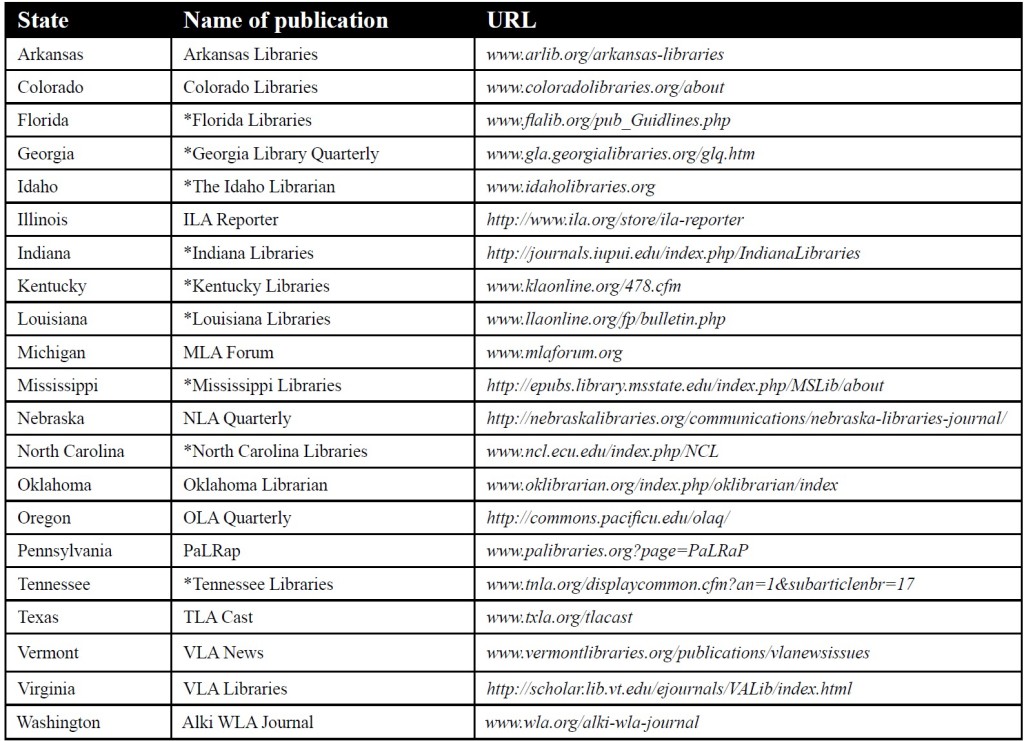