A recently announced pilot program has the potential to “revolutionize the way libraries share books in a digital world.” OK, that certainly caught my eye, given the many difficulties libraries have with lending eBooks, not to mention my past life as an academic interlibrary loan librarian. A partnership called the Occam’s Reader Project, comprising Texas Tech University, the University of Hawai’i at Mānoa, and the Greater Western Library Alliance (GWLA), has announced that they have entered into an agreement with Springer to run a year-long pilot program with GWLA’s 33 members, focused on eBook interlibrary loans (ILL). They claim this is the first major collaboration of its kind between academic libraries and a major publisher.

Occam’s Reader allows libraries to lend eBooks to each other using the document delivery model. It is a software add-on to OCLC’s ILLiad, which provides the workflow for lending and for security of the transaction. The project leaders say that ILL has always been possible under the terms of Springer eBook licenses, but previously there was no process for doing so. By

integrating with the existing ILLiad framework, Occam’s Reader should make eBook ILL part of libraries’ everyday workflow. Users of the Occam’s Reader system receive an email generated by the lending institution. This email includes a customized, token-authenticated link to view their item in a web browser.

The three partners, though they are geographically dispersed, are all members of GWLA. And, all 33 members of GWLA already have ILL reciprocity agreements. The idea first surfaced at an annual meeting of the alliance in 2011. Econtent was becoming an increasingly large part of their library collections but “silo-ization” was an unintended consequence, according to Joni Blake, Executive Director of GWLA. An exploratory task force was established to address discoverability, licensing, and the software to enable ILL of eBooks.

Ryan Litsey, Texas Tech Document Delivery Librarian and one of the lead developers of the Occam’s Reader Project, and programmer Kenny Ketner began working on the software and have spent the last 2 years developing and testing it. Hawaii worked closely with them and developed the interface design.

Litsey says they wanted the tool to be as simple as possible. The name derives from “Occam’s razor,” which posits that all things being equal, the simplest explanation is usually the best.

At this point, the content is in PDF so it can’t be reconstituted or OCRed. The Occam’s Reader just presents the book—pages are images, so there’s no searching, highlighting, or live linking capabilities. This was a compromise with the publisher, so as not to compete with vendor provided interfaces and services. Litsey says, “The patron will not be able to print aside from the print screen [function] since we are trying to stay true to the typical ILL model of just being able to access the book.” The agreed upon loan period at this time is 14 days.

Blake says their current license with Springer doesn’t have a limit on simultaneous users, so tying up a “copy” of the eBook as “checked out” isn’t necessary for this pilot. For other publishers, whose license limits patrons to three simultaneous users of an eBook (as an example), Occam’s Reader would “tie up” one of the eBook “copies,” so the library catalog would indicate that only two “copies” are available and only two other people could use the eBook simultaneously. If the license governing the content allowed for only one user at a time, Occam’s Reader would tell the catalog that the item was checked out for that 2 week loan period and the item would be unavailable to other users—very much as if it were a print book. 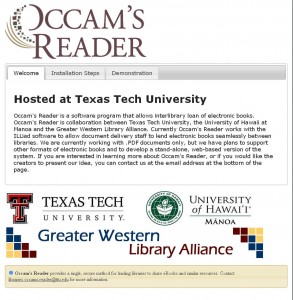 Springer was open to the idea and liked the demo. “Springer has always allowed ILL for eBook chapters under our license terms, but it hasn’t always been easy for customers. It is exciting to participate in this project to find a way of adding this kind of value to our content, and to create a viable option for full-eBook ILL,” said Jason Chabak, Licensing Manager for Springer and project manager for the pilot. “On the data side, ILL has also always been the one missing piece of the puzzle. We are hopeful that through this pilot we can further refine our understanding of what subject collections are most valuable to our customers. This will go a long way in helping us better tailor what we offer based on what we know is important to our librarians and their patrons.” Blake confirmed that Springer has been very receptive to structuring licenses to the way libraries do business.

The participants say that the many features of Occam’s Reader make this “a win-win situation for both GWLA members and Springer.” Benefits include secure online access to borrowed books, compliance with copyright laws and licensing provisions, reporting of usage statistics, and the ability to take advantage of existing Springer features, such as location- and device-agnostic access. Both eBook chapters and full eBooks from Springer are included in the pilot. The eBooks available for the pilot comprise the entire English Springer collection.

The University of Hawai‘i at Mānoa (UHM) Library Occam’s Reader Web Development Team (comprising Arthur Shum, Erin Kim, Wing Leung) has contributed the web-based interface design for the Occam’s Reader display that the library patron uses to read the loaned book, and with some of the .lua scripting for the ILLiad add-on background program for the interlibrary loan staff to enable integrated lending and borrowing of eBooks. We have also worked with Texas Tech University on the initial alpha testing of the system, from request generation to eBook lending fulfillment, using open access titles as test titles.

UHM staff has also provided a sounding board during the development of the Occam’s Reader program including various technical and philosophical issues regarding eBook lending and networked resources. Our different technical backgrounds and diverse (sometimes divergent) opinions regarding the project have worked to create a stronger end-result. Reflecting now, I believe that it is healthy and optimal for there to be a variety of perspectives on any effort that is cutting edge and “pushing boundaries” (to quote our GWLA Executives, Anne McKee and Joni Blake).

Chow says that at this time, the Library has very few Springer eBook content titles that will be part of the Springer pilot for lending. “We are eagerly looking forward to participating in the pilot to borrow titles on behalf of our UHM patrons and to gather patron input on the usability of the reader’s interface.” She also raised an interesting issue. “We at UHM are finding it increasingly difficult to locate libraries with print versions of titles for the more recently published books from a variety of academic/research publishers.”

Have a look at a demonstration of the web-based reader in action. [Note: the demo is a bit blurry because it’s an older build of the system. The newest versions allow the lending library to dictate the image quality.]

The Greater Western Library Alliance (previously known as the Big 12 Plus Libraries Consortium, based on the Big 12 Athletic Conference) spent its first year of formal operation, 1998, organizing itself as a functioning research library consortium with an executive staff and operating budget. Additionally, work began on determining the resource sharing needs of the member libraries and the development of a strategic plan for the organization. During the years since, the Alliance has developed and implemented a variety of collaborative programs designed to enhance and supplement the critical information services that member libraries provide to their respective constituencies. Blake says, “Resource sharing is GWLA’s oldest program, and one our members value greatly.”

Blake says that a number of institutions and library consortia have offered to help or test the new software—there has been high interest in this project. But, the year-long test will be first assessed. They will examine the data generated and gauge the demand. Springer will be checking to see if it hurts sales, or, as Blake believes, it should increase sales. The key benefit of the pilot is to see where the stumbling blocks are.

The project has not determined yet how to expand. It would like to support other formats of electronic books and to develop a stand-alone, web-based version of the system. Occam’s Reader has been designed using open source software and it’s possible it could be an open source project, which would aid code development. The main goal is to maintain rapid development and keep the cost low.

Litsey calls Occam’s Reader a “game changer.” He says it is unique in letting libraries maintain their eBook collections, while loaning them to other libraries. Other consortial approaches have libraries pool their eBook collections. Blake agreed that it’s different. Public libraries buy eBooks for their branch libraries, consortia buy eBooks for member libraries—but these arrangements confine the use of eBooks to certain populations. She says Occam’s Readers aims to break through these boundaries and open up access. Litsey calls it “collection collaboration” rather than collection development. They are hoping for a “snowball effect.” Test the model, start to grow it and then figure out how to do it more broadly.

Minitex, an information and resource-sharing program of the Minnesota Office of Higher Education and the University of Minnesota Libraries, has been looking into the issue of eBook resource sharing. While license terms for resources may allow ILL, there has been no mechanism for ILL of eBooks. Occam’s Reader has been invited to present at the Minitex meeting on May 6, 2014.

Minitex is working with other universities in the CIC (Committee on Institutional Cooperation) E-book/ILL Project. According to CIC’s Kimberly Armstrong, Deputy Director, Center for Library Initiatives, “The problems of sharing eBooks for which libraries have secured rights to lend are common to libraries nationally. CIC is actively following the GWLA Project and maintains active discussions with their developers and interlibrary loan librarians. We look forward to the progress reports on the Occam’s Reader pilot that has just been announced. The CIC will also continue with our own efforts to explore solutions to sharing eBooks just as we have historically with our vast print collections.”

The CIC E-book/ILL Project has prepared a list of what it wants for the project:

• Sharing beyond the CIC

• Ease of use for user

So, many problems have been identified. The conversations are happening. The eyes of many in the academic library world are watching to see what happens with the Occam’s Reader Project.

The session is free and open to any interested librarian; it will be recorded for later playback.

Paula J. Hane is a freelance writer and editor covering the library and information industries. She was formerly Information Today, Inc.’s news bureau chief and editor of NewsBreaks. Her email address is [email protected]