ATG Article of the Week: Has the e-book bubble burst?

ATG Article of the Week: Has the e-book bubble burst? 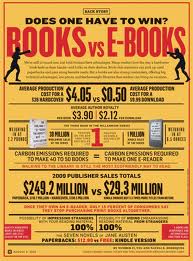 Has the e-book bubble burst? is an article by David L. Ulin, Los Angeles Times Book Critic that offers his take on a Wall Street Journal piece entitled Don’t Burn Your Books—Print Is Here to Stay by Nicholas Carr that argues the e-book bubble may have burst.  (Carr has raised similar questions about the digital revolution before.  He wrote the “2008 Atlantic cover story “Is Google Making Us Stupid?” expanded two years later into “The Shallows,” a 2010 Pulitzer finalist”).  While expressing minor reservations about some of Carr’s assertions, Mr. Ulin agrees with Carr’s main contention that ebooks are best suited to “light entertainment” and goes on to observe “that e-books have filled a niche in the publishing landscape, rather than eating it alive.”  Ulin also points out that while some of the statistics quoted by Carr may reflect generational preferences, he notes that his own teenagers are “platform agnostic, and read on the page as well” as on electronic devices.  In short, the future may have room for both print and digital books.