The final session, called “Hyde Park Corer” took the form of a debate  on the statement: “The Traditional Research Library is Dead”.   Oxford Union-style rules were followed: 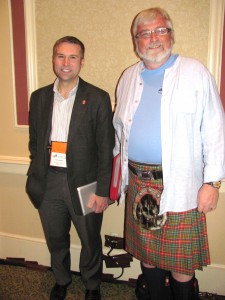 Rick Anderson (left, above), Interim Dean, Marriott Library, University of Utah, took the pro position, arguing that traditional research libraries are dead.  Derek Law (right), Professor Emeritus, University of Strathclyde, took the position that they are not dead.  Both protagonists delivered passionate arguments in support of their stances.

Pro:  The traditional library is dead.

Anderson said that the traditional research library was formed in an era when information was difficult for users to find on their own.  They were unable to organize collections, and negotiate complex user interfaces of stopgap services purchased to improve access.  That is dead; the world of information is easier than ever to navigate and many tools are now available.

Until recently, the traditional library was defined by its large and comprehensive physical collection which was built by librarians speculating on what users would need.  These permanent printed collections  are dead.  Print circulation rates are down dramatically.  Yes, scientists continue to use books, but they don’t check them out from the library.  The traditional online environment is doubtful.  Traditional catalogs were needed in the print era, but  in the online era the practice of cataloging is dead.  The role of the librarian as intermediary is no more.  Only librarians understood how call numbers worked, but today’s users don’t need them any more and feel they are perfectly capable of evaluating documents on their own.  The library is important as a place; even though usage of collections is declining, gate counts are rising.  The library has become a place to do scholarly work, but it is no longer a place to get copies of research works.

What patrons ought to do in libraries is an interesting question, but what they actually do is more important.  We should separate “should” questions from “is” questions and must not make the mistake of assuming that reality will conform to our ideals.

Anti: The traditional library is not dead.

Law defined the traditional research library by examining each of the words in the term.

Tradition is about evolution.  Research libraries have existed for about 3,000 years.  Traditional libraries have always adapted to changing media.  Print, CDs, online systems, and many other types of literature all belong in libraries.

Research:  The library is a place for research, not a children’s playground.  Students need to be taught about information.  Scientific disciplines cannot be self-taught.  We therefore cannot ignore the role of librarians in the research process.  Who knows how to do organizing and managing information?  Traditional librarians.

Library content:  Many things in libraries have been donated, not bought.  A great library is defined by its collections and acquisitions, not its purchases.  The traditional library remains useful, if nothing else, as a backup.  It is universal–as countries withdraw from the Internet by blocking access to it, scholars will still have to find out about them.  One of the great triumphs of international diplomacy in the 20th century is the interlibrary loan system.

The organization of knowledge is a noble effort.  One of the key and undervalued roles of the traditional library is preservation.  It is not fashionable but it is important, and traditional research libraries know how to do it.  In the best research libraries the librarian is part of the research team.  Students are self taught and ignorant without the education of librarians.  The library has evolved into new traditions and has become a welcome social space.

Derek Law responded that some things that traditional libraries do are actually very modern.  The ephemeral nature of the publishing industry is a failed concept.   Research does not exist to support publishing.  Roles do change, but principles do not.  The underlying fundamental principle of librarianship comes from Ranganathan:  get the right information to the right user at the right time.  The vast majority of electronic material is non commercial, and we have failed to deal with it.

Our priciples are unchanging and not fickle.  We must accentuate the positive and limit the negative.

Rick Anderson replied that to survive for 3,000 years we must have been doing something right.  And we were.  We were doing the only thing that reasonably could be done because information was trapped in clay tablets.  Gathering and organizing those objects was the right thing to do.

It is not true that the traditional library is best defined by its non-commercial material.  Many unique and non-commercial materials are never cataloged at all and constitute only a minority of the items in collections.  These materials are not central to the daily life of a library.  They may make a library unique, but being unique and being vital or useful to its clientele are not the same thing.

In the closing poll, 67% of the audience voted Yes, and 33% voted No, so Anderson won the debate.

Due to popular demand, we're extending the Early Bird Discount for in-person registration by one week to Friday, September 17. We asked several attendees, speakers, and exhibitors to share their plans for attending the conference, and what they're looking forward to...