ATG Book of the Week: Upheaval in Charleston: Earthquake and Murder on the Eve of Jim Crow

ATG Book of the Week: Upheaval in Charleston: Earthquake and Murder on the Eve of Jim Crow 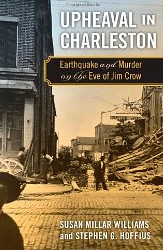 The earthquake of August 31, 1886, with three epicenters in Charleston, was the strongest earthquake to ever hit the east coast of the U.S. Almost every building in the city was damaged. The earthquake struck just as Jim Crow politics emerged. The suspenseful stories intertwine with vivid portraits of volatile social times and a city in anguish and devastation. This is the 125th anniversary of the Charleston earthquake.